It was time to head for home, plus hopefully catch Mitch VK7XDM for another S2S contact. I left Wodonga a little later than planned, with some last minute extra tasks completed. I headed for Mitta Mitta and south on the Omeo Highway. I then headed east on Razorback Spur Track to the junction with Wombat Creek Track and parked close to the junction.

Wombat Creek Track is subject to a seasonal road closure. The summit is only about 450 metres along the track from the junction, with a climb of just over 70 m vertical. As I was walking up the track, I noticed evidence of motorbikes having been on the track very recently. I set up on the edge of the track close to the true summit, probably only one metre higher.

Mitch VK7XDM/p on Collins Bonnet VK7/SC-002 was first in the log using 40 m SSB. After working Mitch, I spotted myself on the CW end of the band. I had five contacts in the log in less than 10 minutes. With no further replies to calls, I moved up the band to work SSB and worked two more stations. After UTC rollover, I spotted myself on 80 m CW, working two more stations. I then moved up the band and spotted for SSB. I heard Matt VK1MA calling, but Matt was not hearing me. The antenna impedance was changing for no obvious reason. I checked all the links and connections but could not see any issues. I worked Geoff VK3SQ on 80 m SSB. Several minutes of calling went without answers. I saw a spot for 20 m, so reconfigured the antenna for 20 m and soon had John ZL1BYZ on ZL1/WK-063 in the log. I moved away from John and spotted myself, but had no callers. I reconfigured the antenna for 40 m and worked Gerard VK2JNG/p in VKFF-2635 before closing down and packing up.

I was soon back at the car and continued along Razorback Spur Track until I reached the junction with Sheevers Road, where I stopped and consulted the Rooftop Map for the area. There were several fallen trees to negotiate along the way. The far end of the road is marked as being in poor condition, so I gave up any idea of exploring further out, and headed back to the junction of Razorback Spur Track with Tokes Creek Track to park and load up the pack. Tokes Creek Track now traverses around the NE side of the summit.

I had chased this summit, so was keen to make it a Complete. The older maps show a track heading over the summit. You can see the blocked start of the track close to the junction, but there is only faint evidence of it beyond a few metres, with lots of regrowth. It was a scrub bash all the way to the summit – about 800 m horizontally plus about 70 m vertical from the GPS track, trying to find a path through the scrub as I climbed the spur line. The scrub continued all the way to what I could judge was the top – there was not much space, with the regrowth around 2 m high.

Once on top, I moved around a few tens of metres trying to find a spot with mobile coverage without success. I set up in a small gap in the scrub and strung out the antenna for 40 m.

A clear spot in the scrub to set up the station

I called on 7.090 MHz and Mitch came back to, from Collins Cap VK7/SC-006. Mitch said that he had easily qualified the summit, but waited around in case I appeared on another summit. Mitch was kind enough to spot me and left the frequency to me. I soon had three CW contacts in the log on the same frequency, so the summit was qualified. I called for many minutes on both CW and voice, but had no replies. I closed down, packed up and headed back down through the scrub – more hard work. Adding to the route finding and squeezing through the thick scrub was the dry and slippery leaf and bark litter on the ground. I drifted a little to the west of the spur on the descent. 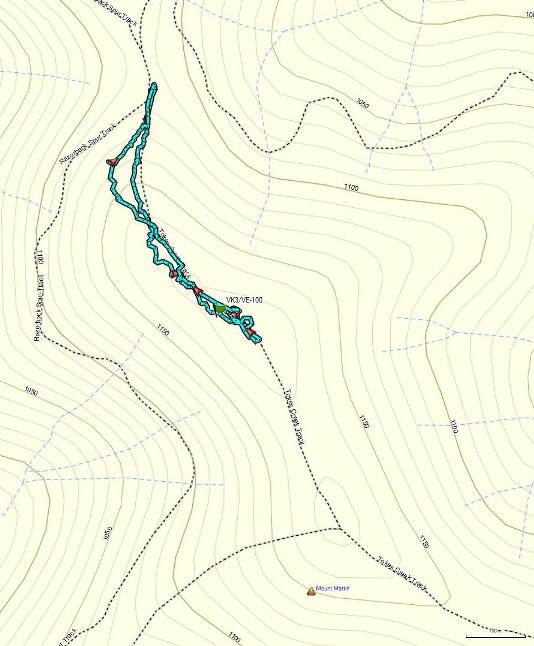 The route to VK3/VE-100. Note that Tokes Creek Track has been realigned

Once back at the car, I headed back along Razorback Spur Track to Pegleg Track and then out to the high point of the track to park.

This summit has a track shown going over the summit, but I find little if any evidence that it still exists. I loaded up and started climbing up the spur towards the summit until well inside the AZ to set up – about 700 m horizontally plus 110 m climb.

I spotted on 80 m CW and worked Nick VK3ANL. Several minutes of calling again went without any responses, so I moved up to my usual frequency in the SSB segment and again spotted, indicating CW calls were welcome. The summit was soon qualified with two SSB contacts plus one on CW – thanks Steve. I moved up to 40 m after opening the appropriate links in the antenna and spotted on 40 m CW. There I worked Gerard VK2IO and Warren VK3BYD/m – over in South Australia, I later discovered. With no more responses to calls, I moved up to 7.090 MHz and worked four more stations. With no more responses to calls, I closed down a little after 0500 UTC and headed back down the spur to the car.

I headed back to Razorback Spur Track and then to the Omeo Highway. I drove past The Knocker VK3/VG-016, as I had activated it earlier in the year. I could have activated, but would only earn the seasonal bonus points. My route was then to the end of Knocker Road, and then south to Omeo. I considered staying the night in Omeo for an early start the following morning to try to get a couple more summits in before the seasonal bonus period finished at 2359:59 UTC on Monday morning, but decided that I had done enough. I headed south to Bruthen, around to Bairnsdale and then back home.