A Sunday saunter north of Briagalong

Well, almost…. But a pleasant drive was had to reach another new summit and to visit two other summits.

I headed off from home for Maffra to pick up Ross VK3NRB and then we headed north to Boisdale, across to Briagalong and then towards Stockdale. Near Stockdale, we turned north on Insolvent Track and soon were travelling behind a 4WD with a trailer – we guessed heading out to collect firewood. At the top of the climb where the pine plantation ends, the other vehicle pulled over to let us pass. I quickly checked the map and resumed the route. The only trick is to watch for the junction where Insolvent Track swings right. We were soon at the prominent bend to the ENE of our target summit, a short distance beyond the junction with Stoney No 1 Road. There was plenty of space to park off the track on the eastern side.

This summit had been our potential fourth target last weekend.

The summit is about 200 m to the SW of the parking spot, with a climb of just under 50 m vertical. The country was relatively open and it was easy to dodge any fallen timber and scrub patches. We found a nice spot to set up and I tossed a line over a tree branch at about 8 m. I strung out a new 80-10 m end fed half wave antenna to use for the first time in the field. I tied the line roughly in the middle of its length and hauled it up. Ross tied off the far end as I found a length of line to hold the radio end to a fallen tree branch.

As I was setting up, Ross headed back down the hill to chase me on 2 m FM and therefore was the first contact with this summit.

I soon had the KX2 set up on 80 m and had an excellent match on the antenna. I spotted myself and started calling on 80 m CW. The first (and only) response came after seven minutes of calling and I soon had Ron VK3AFW in the log. Several further CQ calls went unanswered. I moved up to 80 m SSB and again spotted. Again I had no replies for several minutes before Ron called using his second callsign. I called for a further 5 minutes before moving up to 40 m CW and soon worked John VK4TJ, Gerard VK2IO and David VK2JDR.

I was about to move to 40 m SSB when I saw a spot on ParksnPeaks for Malcolm VK3OAK in VKFF-2141 on 80 m, so I quickly changed down to 80 m. Ross and I both worked Malcolm. I moved back to my previous 80 m frequency and worked Allen VK3ARH and Geoff VK3SQ. I then went to 40 m SSB and only worked Gerard VK2IO. It was now well after UTC rollover and we had both qualified the summit. For the last 20 minutes or so, we could hear chainsaws to our south, confirming our earlier guess about the 4WD vehicle and its occupants… We had been calling for about 50 minutes, so I decided against trying 20 m.

We packed up and started heading down the hill, with Ross lagging behind. Once I was almost back at the road, I worked Ross and thus had the SOTA Complete.

We loaded the gear into the vehicle and continued north along Insolvent Track and then swung west on Winkie Creek Track. This took us to Freestone Creek Road, which we crossed to reach Lloyd Knob Track. I engaged 4WD prior to dropping down the bank to ford Freestone Creek – the entire drive to this point had been in 2WD, with only pot holes and some shallow erosion gutters to negotiate.

I crossed the creek and started the climb up to the next summit. We encountered several steep spoon drains, some rocky patches, a couple of small trees across the track and some steep sections. I travelled over the summit by about 100 m to a spot which allowed for an easy U-turn and returned to the high point to park.

I first activated this summit back in late June 2018. This would be the summit’s second activation.

I again tossed a line over a tree and this time hauled up the ZS6BKW. We set up the station using a folding table and sat only a few metres from the vehicle. I was about to spot myself when I saw a spot for Glenn VK3YY on Mount Beenak VK3/VC-016. I quickly dialled up the correct frequency, not really expecting to hear Glenn as he would probably be in the skip zone. I could hear him weakly and tried calling a couple of times on voice, without any response from Glenn. At the end of his next CQ call, I sent my callsign in CW and Glenn responded on CW. We soon had a CW contact in the log – thanks Glenn. I moved down to 40 m CW and spotted and soon worked Gerard VK2IO, Ian VK5CZ and John VK5HAA. I then moved down to 80 m CW and worked Ron VK3AFW but had no further callers. I then tried 80 SSB and worked Ron VK3ZLP.  A move to 40 m SSB yielded Mark VK7ME, Ian VK5IS and John VK4TJ. I called for several more minutes without any responses. I tried catching Rob VK4AAC/3 in VKFF-2145 but could not hear him. I called Rob on the ‘phone and he explained that he was having lunch but also had antenna issues on 80 m. We agreed to try later after he had finished lunch. Rob could not solve the antenna issue, so no contact was made.

VK portalog announced a new SOTA spot and I quickly moved to 40 m CW and waited for a chance to call Tony VK3CAT/p on Federation Range VK3/VN-029 in VKFF-0556. Tony’s spot indicated that it was raining. I heard Tony work Glenn, with Glenn very weak to me. I called Tony and we soon had the contact in the log.

I then moved up to 20 m CW and worked John ZL1BYZ and Andrei ZL1TM. I then closed and started packing up. I started to drive down the hill, leaving Ross behind to walk. Once I was outside the AZ, I stopped and worked Ross for the chase and a new Complete. Ross joined me in a few minutes and we retraced our access route back to Freestone Creek Road, where we swung south. We travelled about 6.4 km to turn off onto Link Road. The drive down the Freestone Creek valley is narrow and sinuous but is quite spectacular with the rocky steep slopes of the valley.

We climbed up Link Road for about 3.7 km, driving past the summit on the road before a hard left turn to climb the rougher track up the firebreak to the summit.

I had first activated this summit back in August 2013, approaching from the west. There have been no activations since that activation. I guess that other activators have dismissed these low points value summits when there are higher value summits in the region.

I again tossed a line over a tree branch and hauled up the ZS6BKW. The folding camp table was again set up a metre or so from the vehicle. As I was setting up the station, Ross headed down the hill to make a contact on 2 m FM.

We could see rain approaching, so decided to start on 40 m SSB, hoping for a quick activation. The first caller was Roly ZL4AU in Invercargill. QSB meant that Ross failed to make a contact with Roly. Next was John VK4TJ, followed by Gerard VK2IO/m. Just as we finished with Gerard, the rain arrived. We quickly packed up the radio, pulled down the antenna and packed up. I drove down the hill to work Ross as he walked down, thus gaining the Complete.

We retraced our access route to Freestone Creek Road and again headed south. We encountered a few vehicles along the way, but soon reached the bitumen and then headed to Briagalong and back to Maffra.

It was an excellent day out. One new summit activated and chased plus two new summits chased and Complete.

Thanks Ross for the company and contacts. Thanks to all the chasers. 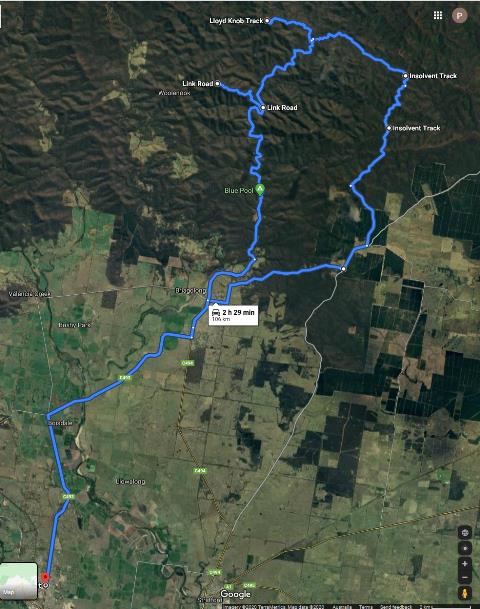 The driving route for the day. Image thanks to Google Maps.

1 Response to A Sunday saunter north of Briagalong