A new summit above Dandongadale

The weather in Wodonga was forecast to be similar to the day before, only hotter. After assessing the various reports, I decided to again head for the hills.

The access route had plenty of steep and deep spoon drains plus several steep sections. The track surface was good for most of the route. My vehicle – a Ranger with 50 mm lift – did scrape the top of a couple of the spoon drains.

I arrived at the summit shortly before UTC rollover and was set up, spotted and calling shortly after the hour. First in the log was Warren VK3BYD. Rik VK3EQ could not hear me. I soon had four in the log, though the contact with Compton VK2HRX was difficult – Compton was an easy copy for me, but I was low to him. 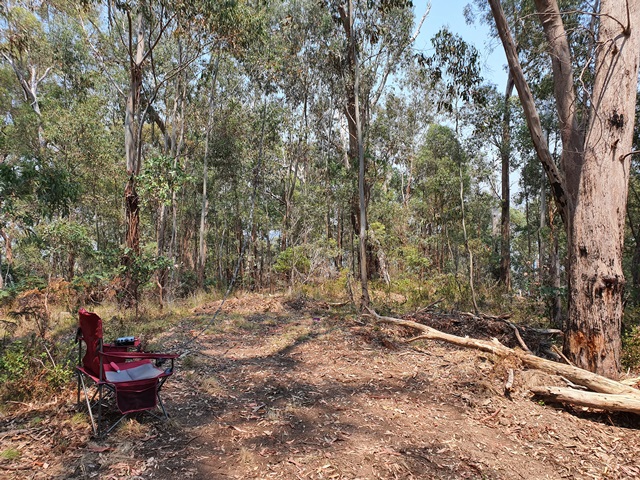 During the activation I had been occasionally checked on Glenn VK3YY/p on Mount Tassie VK3/VT-046. I never heard him at a workable level. Glenn sent me a text message that I was not workable on 20 m SSB. I rang Glenn and suggested we try 40 m CW. I quickly changed frequency and hit the Tune button. Shortly after, I could hear myself coming back through the phone as Glenn moved to the frequency. I soon hung up and then worked Glenn for a Summit to Summit. Thanks Glenn.

I packed up and checked the RoofTop Map. I had considered driving out along Ducati Track, but the track was shown as ending short of the main road, probably at the edge of the plantation. Therefore I decided to retrace my access route to exit. I packed up and returned to Lake Buffalo Road and back to Myrtleford to grab some lunch.

I then considered my options. I decided on the simplest one: Mount Stanley was the logical choice.

After an uneventful drive, I arrived at the summit. I set up out of the way so as to not annoy the fire watch person.

I spotted myself on 40 m CW and was soon working stations. Ten minutes of operating yielded six stations. I then moved to 40 m SSB, working another three stations. 20 m CW yielded only Andrei ZL1TM. I returned to 40 m SSB for one final station, thus qualifying the summit on both SSB and CW.

I then packed up and headed back to Wodonga.

This entry was posted in SOTA and tagged Mount Stanley, VK3/VE-126, VK3/VE-263. Bookmark the permalink.