I needed to head to Melbourne to pick up an item. After the trip in the morning down towards Moorabbin, I made my way towards Bayswater. I joined some regulars who meet at a Club venue in a nearby area each week for lunch – I rarely make it to the gatherings, but they are always good fun.

After lunch, I made my way out to Yarra Glen and then north on the Melba Highway before heading east on the Healesville – Kinglake Road towards Toolangi.

I then headed north on Spraggs Road, then east on Nolans Road. This is an area of past and present logging activity, so one needs to stay on top of navigation! I swung north on Starlight Flats Road, which had a few slightly rougher sections, but would be navigable with care in a 2WD. Next it was right into Klondyke Road and then a hard left into Mt Klondyke Road. This runs into Chevys Track at a T intersection but on the road it looks as if Mt Klondyke Road simply swings to the right. Climb up to a cross road and swing right into Aeroplane Track. There was an open gate on the desired route south. The road quickly became rougher and rockier, with a couple of spoon drains. I managed to climb in 2WD, but some 2WD vehicle drivers might wish to park near the intersection and walk up the hill. The walk would be about 330 m with a climb of about 30 m vertical.

(An alternate approach would be to turn off Nolans Road into Starlight Road, then swing right onto Blowhard Road. Then a hard left onto Klondyke Road and then onto Mt Klondyke Road.)

This summit has a large activation zone. I stopped at a rocky clearing at the top of the climb from the intersection to the north of the summit. I parked off the track and soon had a line over a tree branch to haul up the ZS6BKW antenna and had the station operational away from the vehicle. The areas around the summit have been logged in the past: 2000, 2007, 2010 and 2017 near the intersection. The area is therefore in various stages of regeneration and affords some views to the north and east.

The view from close to the operating site, from North at the left around to just south of East

I set up the ZS6BKW with a line over a tree branch and then set up the station in a little shade. I spotted and started calling on 40 m CW and was soon called by two stations at the same time. That was soon sorted out and I had Andrei ZL1TM, Gerard VK2IO/m and John VK4TJ in the log. After no responses to further calls, I moved up to 40 m SSB to work Ray VK4NH/2 and VK4DXA/2. I had no further callers, but I had not spotted myself. I decided to move up to 20 m to see if I could hear Nick VK3ANL/4 who was in a Park. Nothing was heard, so I moved to 20 m CW. This moved yielded four ZL stations: Andrei ZL1TM, John ZL1BYZ, Wynne ZL2ATH and Geoff ZL3GA. I then tried 20 m SSB without any responses to calls. I next moved to 80 m SSB and worked Duncan VK3XBC and Rik VK3EQ. With no further calls, I shut down and packed up.

I turned left into Monda Road and climbed up past the start of the road the Mount St Leonard. I continued on, past the Horseyard. The road surface deteriorates beyond here, with sections of chunky rock repairs filling soft sections. The surface briefly improves a little before a Y intersection. The left branch looks a little rough at the start but is the correct option. The right branch becomes a little rough and travels to the south of the target summit. At the far end, I swung hard left and climbed slowly up the cut up tracks to the summit area to park.

MapshareVic shows that the informal camp area and the junction of Nursery Spur Road and Monda Road as being just inside the National Park boundary, so you can activate for both SOTA and VKFF as long as you are careful with your site selection….. I set up on the southern edge of Monda Road and was thus safely inside the Park boundary.

The informal campsite at the road junction

Due to the forest growth, there is not much of a view except to the west along the cleared road alignment towards Mount St Leonards, which is obscured by the trees. 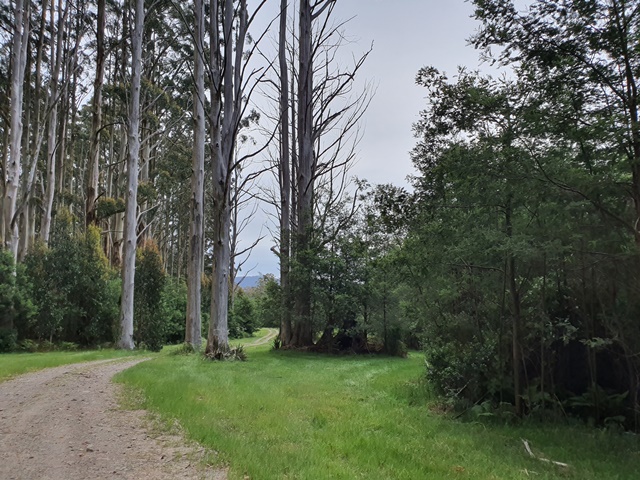 I again set up with the ZS6BKW hauled up with a line over a tree branch. The station was assembled on the ground in an area with short grass.

To exit, I followed my nose out to the north, knowing that Brian VK3BCM had approached the summit from that direction. I headed north on Nursery Spur Road, with sections of the regenerating forest having solid fencing. I reached a T intersection and swung right into Lookout Spur Road. Take notice when you see the Bicycle signs – there is a downhill track which crosses the road a couple of times – expect to encounter high speed cyclists descending, especially on weekends!

Stay on the obvious main track until you reach a major T intersection with Pine Drive and swing right. Descend down to the intersection with Plantation Road to again turn right. Continue on straight ahead at the next intersections and you will find yourself on Anderson Lane and soon at the Maroondah Highway on the northern edge of Narbethong.

One should note that lots of the mapping shows tracks continuing at some intersections, but they have been blocked off. Follow the obvious main trafficked route and you should be okay.

I swung right onto the Maroondah Highway and headed across the Black Spur to Healesville and then made my way across the hills to reach the Princes Highway and eventually to home.

Again, thanks to all who called me during the afternoon.