After a quiet day on Tuesday, I felt that it was time to head home. I loaded up the car and started the drive down the Hume Highway to Benalla and then south to Mansfield. I stopped at the Bakery to grab something for lunch and then headed towards Jamieson and then turned onto the Eildon Jamieson Road.

At the top of the climb, I turned onto Lake Track to find that the track had been very recently resurfaced. The surface looked relatively smooth but there were a few loose rocks on top plus rocks which had been damaged by a bulldozer doing its work. I engaged 4WD simply to ensure good traction. Some distance up the track, I passed a parked bulldozer just off the edge of the track. I turned into Lake 1 Track and parked at the high point.

I quickly set up the station and saw a spot for John VK5FLEA/p in VKFF-1712 on 40 m CW. I soon had John in the log. I then spotted myself a couple of kilohertz lower and started calling. I worked Gerard VK2IO and Dave VK2WQ. With no more responses to CQ calls, moved down to 80 m but received no responses to CQ calls on either CW or SSB. I saw that John had moved to 40 m SSB and moved up the band to work him on voice.

I then moved down to 7090 kHz and spotted myself. I soon had five SSB contacts in the log and also worked four more callsigns on CW on the same frequency. I moved up to 20 m CW and worked seven stations.

Of note, Geoff ZL3GA reached exactly 1000 Chaser points with his contact with me, thus qualifying for Shack Sloth. Congratulations Geoff!

With 20 contacts in the log and no responses to further calls, I decided to pack up and resume the trip.

I headed back down to Eildon Jamieson Road. I then continued south along Mount Terrible Track. It had also been recently resurfaced.

The track climbs about 200 m vertical in around 1.5 km from the start of the track. I drove up to the top of the summit to park and then set up the station. I spotted for 40 m CW and soon had three contacts in the log. I next tried 80 m CW but received no calls. I moved up to 20 m CW and worked five ZL stations.

Whilst I was on the summit, I could hear a bulldozer working to my south – my direction of travel.

Having been calling for more than 30 minutes, I closed down and packed up the station.

I was set up and made my first contact in just under an hour after the last contact on the previous summit. I spotted on 20 m CW and Geoff ZL3GA was first in the log. He was followed by John VK4TJ and John ZL1BYZ. I had no further calls on 20 m CW. I moved to 40 m CW to work another three stations. I finally moved down to 80 m and worked Geoff VK3SQ for the last contact on this summit. The temperature was dropping and the wind strength was building. I had spent 30 minutes calling on the summit, so decided to again pack up and to continue the trip south.

The track was very rough in places – lots of loose rock, ruts and exposed rock shelves. It took me about 30 minutes to travel the five kilometres to the next summit.

The summit had clearly been used as a campsite by 4WDers. There was plenty of grassed area plus some snow gums. As soon as I parked, I spotted for 80 m CW. I had some issues with getting the antenna up, with quite strong wind gusts. Once the station was set up, I had at least two stations responding to my first CQ call. Geoff VK3SQ had the honour of the first QSO with this new summit. Ron VK3AFW and John VK2YW followed, but then no further callers. I moved to 40 m CW and worked another four stations. I then moved to 40 m SSB and worked three stations. 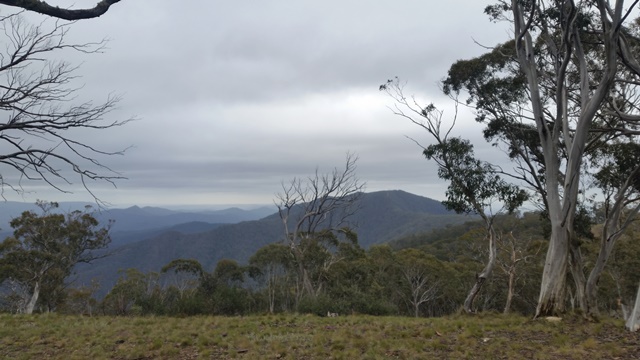 The view back to Mount Terrible

By this time, I was feeling the cold: the air temperature was about 5 degrees, with the wind above 20 km/hr and gusting up above 35 km/hr, the wind chill factor made the apparent temperature close to zero.

I decided to close down – it was now almost 1700 local and I still had a long drive in front of me.

The track was still quite rough for the next 14 km. The track improved significantly once I reached Boundary Track, which was in good condition due to recent logging activity in the area. The next 10 km was much easier and quicker. This had me at the Warburton-Woods Point Road, just below Mount Matlock VK3/VC-001.

Here I mentally flipped a coin, as there are two route choices which are similar in drive time: I could have turned left and travelled via Aberfeldy and Rawson to get home, or turn right and work my way back via The Oaks, Nine Mile Road, Tooronga Road, Tanjil Tooronga Link Road and then to Icy Creek, Hill End, Willow Grove and Moe and then home. I chose the latter route and arrived home shortly before 2000.