The weather forecast was for rain and possible thunderstorms, with winds and warm temperatures. My assessment of the satellite imagery was that the worst of the weather was likely to arrive mid to late afternoon. I decided to head out to another new summit less than an hour to the east of Wodonga.

This new summit was one that I had identified some time ago and advised Wayne. The original summit (694 m) was not valid as there are two knolls about a kilometre to the southeast surrounded by 700 m contours. The saddle between the old and new summit locations is above 670 m, so all three high points fall within the AZ of the old summit. I have operated from the new location in the past.

I approached the summit via Old Tallangatta, onto Jarvis Creek Road and then onto Plateau Road to climb up to the ridge line. The road traverses the AZ, so pick a convenient spot to park off the road and find a spot to set up.

I set up with my heavier ZS6BKW antenna, hauled up with a line over a tree branch. I was soon set up and spotted myself on 40 m CW at 2315 UTC. Gerard VK2IO was the first caller. Steve VK7CW was next, followed by John ZL1BYZ and Andrew VK1DA on VK2/ST-034 for a summit to summit (S2S). Summit qualified on CW.

With no further responses to CQ calls, I moved to 40 m SSB and worked Gerard VK2IO. Further calls produced no responses and I noticed a spot for a JA on 17 m, so I quickly changed bands. I soon had Katsu JP3DGT/3 on JA/KT-007 in the log on 17 m CW for another S2S.

I returned to 40 m SSB and worked John VK5FLEA and Tony VK7LTD, but had no other callers. I had noticed significant rapid QSB at times. I spotted and moved to 20 m CW, with no responses. Next was 80 m CW, again with no responses. I finished on 80 m SSB, working a couple of stations in Gippsland.

I packed up and returned to Old Tallangatta and decided to head to Mount Granya.

This is another drive-up summit. Approach via Granya Road and then Mount Granya Road. There is picnic table, telecoms station and fire watch tower at the summit, plus toilets nearby. There are great views to the south and south east from the summit proper, plus a short walk leads to a lookout with views to the west and southwest.

I again erected the ZS6BKW but was in too much of a rush. I spotted with the incorrect reference (VK3/VE-166) and I had not fully strung out the doublet legs – the ends were still on the ground. The KX2 tuner matched the antenna, but I am sure efficiency would have been down! I worked Gerard VK2IO and John ZL1BYZ on 40 m CW before I recognised that the ends of the antenna were on the deck. With that corrected, I returned to calling but had no responses. I tried 80 m CW after spotting, when I noticed the incorrect reference, so corrected the spots that I had made. I had no responses. I spotted on 30 m CW and worked Steve VK7CW. Next was 20 m CW and again worked John ZL1BYZ, but had no other responses to CQ calls. I returned to 40 m CW for a few minutes and worked Michael at VK2ATZ.

I then moved up to the Parks focus frequency on 40 m SSB to work Shane VK2LUV and Ian VK5CZ.

I next tried 80 m SSB, working Allen VK3ARH/VK3HRA. I also worked Allen on CW on the same frequency. With the summit and Park both qualified, I started to pack up, but then heard the audio of a Parks spot from ParksnPeaks.

I quickly reassembled the transceiver system and worked Colin VK2JCC/2 in VKFF-0281 on 40 m SSB. I then packed up and headed back to Wodonga. During the drive back, I had a few spots of rain fall, but insufficient to activate the automatic wipers.

I was safely back in Wodonga in warm and humid conditions – above 30 C, humid and gusty winds. Rain did not arrive until very late in the afternoon.

Sunday was very wet, so I had a quiet day with Mum, including a drive to Rutherglen. In the late afternoon, I started writing up the activities of the last few days.

The weather forecast was for possible late rain, so I decided to head out for a couple of summits to the east of Wodonga.

First stop was the Tallangatta Bakery to grab something for lunch. I then headed to Bullioh and south to Tallangatta Valley. Google Maps suggested I could access the target summit via Left Hand Road, but my examination of the topographical maps suggested the route may have issues. When I arrived at the intersection, the sign for Left Hand Road had a No Through Road sign beneath the main sign. I went with my plan B: I continued south and around to Cravensville Road – the route that I have used a couple of times to access Gibb Range VK3/VE-069. I knew that Cravensville Road was likely to be passable. I could have saved some distance by taking Forbidden Valley Track, but it was an unknown to me. Once on the top of the range, I turned left to remain on Cravensville Road and headed NW to reach Rogers Creek Track. A short distance up the track, after a few large spoon drains, I reached the high point of the ridge and the junction with Forbidden Valley Track.

The track junction is above 1060 m, so the junction is in the Activation Zone for the summit. The scrub was moderately thick, so I decided to activate at the junction. I set up the ZS6BKW antenna and assembled the station.

I commenced on 40 m CW and soon had Steve VK7CW in the log. Five more CW contacts followed. I moved to 40 m SSB and worked Rik VK3EQ. With no responses to further calls, I changed to 80 m SSB to work Geoff VK3SQ, followed a few minutes later by Warren VK3BYD on CW.

It was UTC rollover, so I moved up to 20 m CW to work John VK4TJ and Phil ZL3PAH. With no more callers, I closed down and packed up. I returned to Cravensville Road and continued northwards to reach the Murray Valley Highway at Shelley, then headed west to Koetong and Firebrace Road, then Firebrace Track and around to the car park for the Conic Range Walking Track.

The car park has space for several vehicles. Nearby is a picnic table in a grassed area. The walking track starts in the left-hand corner. A sign indicates a distance of 1.5 km and 45 minutes return to Conic Rocks, climbing up a spur through Blue Gum forest. 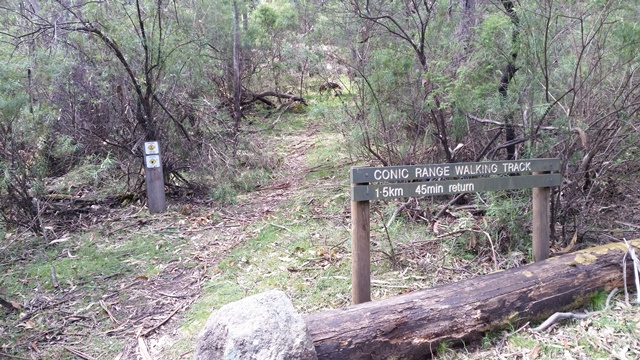 The start of the walk to the summit

There were a few trees across the track and I soon reached Conic Rocks with the extensive views to the north, from Mount Granya to the west around past Mount Lawson. The summit is another 200 m and 15 – 20 m vertical up the spur. There are faint tracks between the granite tors and the scrub.

I reached what I believe was the summit, or very close to it: it is a bit tricky given the terrain and scrub.

I had been hoping for a S2S with Allen VK3ARH, but he was never spotted. I am unsure of the outcome of Allen’s expedition for the day.

The view to the north from the operating site

I packed up and returned back to the car. Care is required navigating back to the formal walking track as it is easy to lose orientation amongst the timber and rocks.

On the way back down the track, I almost stepped on a 1-metre copperhead snake (my best guess at ID and length) when stepping off a log….

Once back at the car, I had a late lunch and then drove around towards Mount Lawson and looked at a possible route to VK3/VE-262, another of the new summits. This failed, as I expected: the summit lies in part of the HVP Plantations in the northeast. Most roads leading into the plantations have large STOP signs barring public access and many have a large sign indicating that Induction and Permits are required prior to access.

I retraced my access route and headed back to the Murray Valley Highway and then back to Wodonga.