VKFF National Coordinator Paul VK5PAS had announced a special certificate for those amateurs who made the effort to activate a VKFF reference on World Ranger Day. In the days leading up to date, a number of operators indicated that they were planning to be out activating Parks. After checking the weather forecast, I decided to also head out to some local Parks with the aim of building up activation counts towards the Boomerang Award as an activator. I posted an Alert on ParksnPeaks for the first target Park.

I had a leisurely start. I managed to work Gerard VK2IO/5 in VKFF-1114 and Rob VK4HAT/p in VKFF-1511 before I shut down the radio shack and headed out for the day. I made a visit to the local Bakery to grab something for lunch and then headed out to Tarra-Bulga National Park via Traralgon South.

When I reached the T intersection with the Grand Ridge Road, I headed east towards Carrajung.

There are several sites where one can operate in this Park. Many go to the Visitor Centre near Balook, but I ruled it out as mobile phone coverage is marginal at best in my experience. The Visitor Centre is also popular with visitors, so one needs to be careful when setting up your antenna. 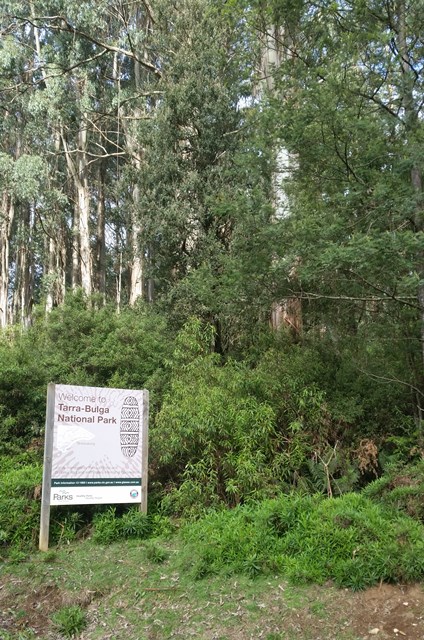 There is an old picnic area about 1.4 km east of the junction of the Grand Ridge Road and the Traralgon-Balook Road, not far beyond the intersection with Cooks Road. There is a Park sign adjacent to the entrance. I parked in the picnic area, making sure to avoid the tree guards around the planted trees. There is plenty of room but no facilities.

I managed to toss a throw bag over a tree branch at about 14 m up and soon had the ZS6BKW antenna set up, right at the limit of the feedline. It was a cold morning, so I connected the feedline to the tuner mounted in the car and operated from the driver’s seat.

On switching on the radio, I had good signals from Gerard VK2IO/5 in VKFF-1114. I waited for a chance to work Gerard, who then offered me the frequency. I accepted the offer, but noted that I would first try to hunt the other stations that had been spotted. Next in the log was Ade VK4SOE/p in VKFF-0471, followed by Ken VK2KYO/p in VKFF-1785. I heard nothing from Mike VK6MB/3 on 40 m SSB. I returned to 7.144 MHz and soon worked Cliff VK2NP in Sydney. A few minutes later, a spot appeared for Mike VK6MB/3 in VKFF-2032 on 80 m. I quickly changed bands – easy with the antenna in use – and soon had Mike in the log. I returned to 40 m and started working a string of hunters. Early amongst those worked was Alan VK2MG who was chasing my Park for the Keith Roget Memorial National Parks Award. Glad that I could assist Alan! I soon had around 18 in the log, including Park to Park contacts with Grant VK4JAZ/p in VKFF-2878 and Ian VK1DI/2 in VKFF-0385.

I changed to CW and worked seven stations, then went to 20 m to chase Ian VK1DI/2 again, and then Gerard on CW on 20 m. I then swapped bands to 80 m for another six stations, most at closer range who could not hear me on 40 m. A change to 30 m yielded another eight contacts, all in VK4.

I then returned to 40 m, working Neil VK4HNS/p in VKFF-0475. I found a clear frequency and had a long chat with Sue VK5AYL regarding logging requirements when activating a SOTA summit. Sue is close to finalising the next version of her iOS logging app…..

Next was John VK5BJE in VKFF-0785. John had just set up his station, so I was first in the log. After another hunter on 40 m SSB before swapping to CW mode on the same frequency to chase Gerard VK2IO/5 for another mode. Two stations came back on CW, but one did not respond after I worked the first station. I had 48 contacts in the log, so announced “Final calls” and then closed down and started to pack up the station.

Whilst in the middle of rolling up the antenna, I heard the Spotting sound from ParksnPeaks. I finished packing up and reconnected the mobile whip to the radio and soon had another Park-to-Park contact in the log: Angela VK7FAMP/p in VKFF-2929. I had only needed 10 contacts to qualify this Park for the Boomerang Award, but ended up with 49, with 12 Park to Park contacts: a profitable couple of hours of operating.

I exited the park and returned to Traralgon South.

I entered the reserve via the track just north of the entrance to the township and parked within the Reserve. I again tossed a line over a branch and erected the ZS6BKW antenna and was soon on air from inside the car – it had warmed up a little, but was still only around 8 degrees.

Ade had been occupying 7.144 MHz for quite a while and wanted a break to grab some food and drink and offered me the frequency, so I spotted myself and started calling. I soon had six more in the log, including Gerard VK2IO/5 in VKFF-1114. I dropped down to 80 to work Mike VK6MB/3 in VKFF-2236 and then returned to 40 m to catch Ian VK1DI/2 in VKFF-0406 before returning to 7.144 MHz. I managed a few more on 40 m SSB before I dropped down to 80 m to start calling there, working six more stations, including Rob VK4AAC/3 in VKFF-0132. I returned briefly to 40 m to work Adrian VK5FANA in VKFF-1755 before I closed down and packed up.

The next Park is quite close – only about 750 m to the east. Rather than drive around via the sealed roads, I took a direct route to North Boundary Track and then headed east along it. At the Reserve boundary I saw a sign indicating no vehicle access at that point. I continued east and stopped briefly at a high point, only to find poor mobile coverage. I continued on until I reached Callignee South Road, and then retraced my route to the top of the hill I had just driven over. I check mobile reception and simply parked the car within the boundary of the Reserve. I spotted myself and started calling simply using the mobile whip antenna.

First in the log was Adrian VK5FANA in VKFF-1755, followed by Ade VK4SOE/p in VKFF-0471. The band was starting to be busy, with DX stations starting to appear. I found a clear frequency and started calling after spotting myself. I soon had 11 contacts in the log, so I choose to shut down and travel to the next Park.

I returned into Callignee South Road and headed south. The next Park was about 9 km away, so it did not take long to move to the next Park.

I set up just inside the northern boundary and set up the ZS6BKW antenna with a line over a branch. Ade VK4SOE/p in VKFF-0471 was first in the log, followed by Paul VK5PAS/p in VKFF-0784, Gerard VK2IO/5 in VKFF-0276 and Mike VK6MB/3 in VKFF-2236. I found a clear frequency, spotted and started calling. I soon had another 10 contacts in the log, including Adrian VK5FANA in VKFF-1755. I dropped down to 80 m and soon had seven more contacts, including Mike VK6MB/3 in VKFF-2236. I closed down and packed up the antenna. Another spot came through and I was able to work Steve VK4JSS/p in VKFF-1525 with the mobile whip. I then made a decision to try to squeeze in another Park on the way home. The activation time was a significant addition, but driving time was only 5 or 10 minutes extra.

I decided to operate with the mobile whip, minimising set up time and was hoping for a quick activation. First in the log was Gerard VK2IO/5 in VKFF-0276 on 40 m CW. I moved up the band to then SSB segment, spotted and started calling. I worked 8 stations in the next 8 minutes before I changed to 40 m whip for its 80 m brother. On 80 m SSB, I worked Mike VK6MB/3 in VKFF2236 and Paul VK5PAS/p in VKFF-0784, plus a couple of VK2 stations. I then swapped whips again and managed to work Hans VK6XN/p in VKFF-2940 for a final Park to Park contact.

My voice was rather hoarse after a long day – 120 contacts in the log. I closed down and started the drive home – around 30 minutes away.

Overall, a good day of Parks activity. Four Parks qualified at VKFF level and one at WWFF level. The last four Parks activated will need future visits to bring them up to 5 activations for the Boomerang Award, but the activation of Tarra-Bulga National Park was the fifth activation for me.

Many thanks go to all the Hunters out there and especially to all the operators who made the effort to activate a Park – I managed to work 18 unique Parks during the trip.

Special thanks to Paul VK5PAS for the terrific certificate! 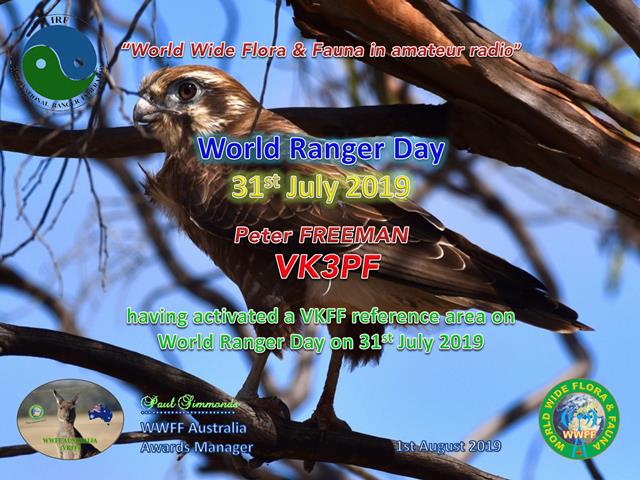