The last few weeks have been busy for Hunters participating in the VKFF and WWFF award schemes here in Australia. A number of activators have been out and about, but most notable are Gerard VK2IO who has worked his way north through South Australia and into the southern Northern Territory, plus Mike VK6MB travelling through southwesternern NSW and northern Victoria. Mike has finally qualified for the Keith Roget Memorial National Parks Award Grand Slam, awarded to those who have chased all 45 Victorian National Parks and has also activated all of the National Parks in Victoria. Well done Mike!

I know that I missed several Park activations over the weekend of 13 and 14 July, as I was Chairing the annual GippsTech conference. But such is life!

Qualification for the first certificate in this latest batch occurred on 12 July. The contact was with Mike VK6MB/3 in Yetmans Flora and Fauna Reserve VKFF-2502.

I think that the photo on this certificate is looking across to Perth from Matilda Bay Reserve VKFF-2825. Another great photo from Paul VK5PAS. 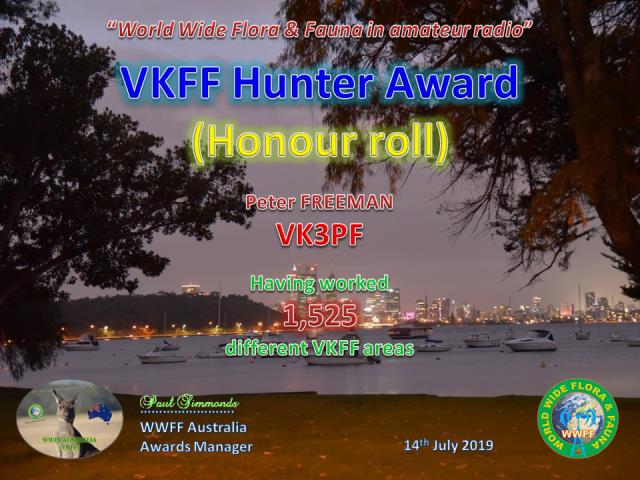 Interestingly, the contact with Mike VK6MB/3 in Yetmans Flora and Fauna Reserve VKFF-2502 also took my WWFF hunted tally to 1544. Thanks again Mike!

In the week following the GippsTech conference, several activators were out and about and I had the chance to chase them. Gerard VK2IO/5 was still travelling north. Mike VK6MB was still activating in northern Victoria, giving me several new Parks. Mark VK4SMA and Scott VK4MGL were out in Queensland. Ian VK5CZ has recently been activating some Parks, having finally achieved SOTA Mountain Goat. Plus I took a trip around some local Parks together with Ross VK3NRB. My goal was to build up some activations for the Boomerang Award, plus I had the chance to chase Ross in some Parks which only I had previously activated. This is simple to achieve using a handheld radio on 2 m or 70 cm FM, or my KX2 with only an unshielded dummy load as an antenna: I make sure that Ross is inside the Park boundary and that I am outside the boundary, making the contact valid according to the WWFF rules.

The contact which qualified me for the VKFF 1550 certificate was with Peter VK3TKK/p in Big Hill Nature Conservation Reserve VKFF-2046 on 22 July 2019 – one of four Parks activated by Peter on that day. He tried to access a fifth Park, but the track looked very poor – rough and slippery, not suitable for a standard road vehicle.

Another great photo from Paul VK5PAS, who usually spends some time walking around each Park he visits with his camera and long telephoto lens…..

So once again, I tender my thanks to all the Activators who get out and provide all the Hunters with some fun in attempting to work you. Thanks also go to the VKFF admin team members and the WWFF admin team members for all your efforts to keep the program running smoothly.

This entry was posted in WWFF and tagged Awards, VKFF, WWFF. Bookmark the permalink.