The trip home from Sydney

I did not get away from my hosts’ home until around 1100. We spent some time chatting over coffee and time went quickly. As a result, I missed Andrew VK1DA/2’s activation of Mt Bindo. I looked at the weather forecast and decided to abandon any thoughts of any activations: a severe cold front was due to come through, with snow and gale force winds. I considered my options and decided on visit to a warehouse – Haverford. I found the venue okay and soon took possession of some squid poles and some hand casters. I then made my way towards the Hume Highway to head south.

The trip was relatively uneventful, with a significant delay due to road works on the Hume Highway near Berrima. I stopped at the service centre near Marulan to fuel the car and grab some lunch. I should have fuelled the car in Sydney where prices were more than 15 cents per litre cheaper! When I got back on the Highway, traffic was extremely slow. If I had been aware of the magnitude of the delay, I would have turned south towards Bungonia and then worked my way towards Canberra. The delay was due to more road works, this time near the junction with Winfarthing Road. It took over an hour to travel the 10 km! The trip was uneventful once past the road works.

I was in contact with my friend at Nimmitabel and arranged to stay there. I coordinated with Rod on my progress and Rod ordered Chinese food from a restaurant in Cooma, with the food ready for me to pick up and pay for on my way past Cooma.  So dinner was ready to eat once I arrived at destination.

My hosts Rod and Judy were due to make a run down to Bega on Tuesday morning. I discussed options for some summits with Rod and decided on two targets. I did not research the approach routes and simply headed towards Bega as a start. I then entered my first destination into the navigation system and started following the route instructions…..

Care is needed with this summit. Both Google Maps and the Ford GPS navigation suggest an approach via Clarkes Road…. NO GO! The road traverses Private Property and the western end has large signs telling you to turn around. I headed to Bega and made my way to Dr George Mountain Road and on to Mumballa Creek Road, only to find a Road Closed sign due to bridge work. The work was scheduled to finish on 21 May 2019, but is obviously not yet completed. The signs gave an alternate route via Whittles Road, Smiths Road and Lizard Road taking you back to Mumballa Creek Road and then to Mumballa Trig Road. All went okay apart from dodging some kangaroos and a variety of litter (bark and small branches) on the road blown out of the trees in the high wind conditions on the previous day. Progress stopped when I arrived at the junction with Clarkes Road, when I reached a very solid locked gate, plus a locked gate on Clarkes Road.

The signs indicated that authorised vehicles only may access the road to the summit, plus also indicated authorised person only may visit the summit. The signs were posted by the Park Board of Management. When I first saw the locked gate, I checked the maps. The climb is about 5 km horizontally, with a vertical climb of around 360 m. I decided against walking the route and then read the sign more carefully….. No go for this one!

Signs on the gate below Mumballa Mountain

I was aware that the boundary of the National Park ran alongside the road reserve, so I travelled back down Mumballa Trig Road and turned into Mumballa Creek Falls Road, which heads to the Biamanga Cultural Area. I parked about 100 m in along the road, thus ensuring that I was inside the Park. 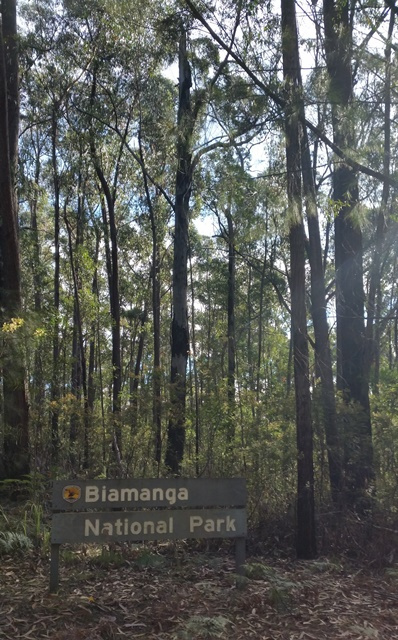 I tossed a line over a tree branch and soon had the ZS6BKW antenna erected. With cool temperatures, I again connected the antenna to the radio in the car. I managed to spot myself and soon had Hunters calling. First in the log was John VK4TJ at 0054Z. Next was Rob VK4HAT/p in VKFF-2876. Four Hunters later was Mike VK6MB/3 in VKFF-0728. After working 11 Hunters, I dropped down to CW and worked Steve VK7CW. With no more callers, I tried 80 m CW and worked Gerard VK2IO but had no other callers. I moved to SSB and worked five Hunters.  I returned to 40 m SSB for two Hunters, followed by John VK4TJ on CW on the same frequency. I returned to SSB and had no more callers. I swapped to 20 m SSB and again worked VK4HAT/p and VK6MB/3.

I returned to 40 m SSB and started calling. I worked 20 more Hunters, including five on CW. I now had 45 in the log – Park qualified. I packed up and head back down towards Dr George Mountain Road.

(Once I had returned home, I checked out the NSW National Parks and Wildlife Service web page. Biamanga National Park has been returned to the traditional owners and is leased back to NSWNP&WS. The Management Plan for the Park has some very interesting information.)

Once down out of the hills, I headed back towards Bega. On the way in I had seen a sign for Mimosa Rocks National Park. I kept an eye open as I travelled and entered Quarry Road and travel a few hundred metres. On checking the maps, I could tell that I was inside the Park boundary. I parked and spotted myself. 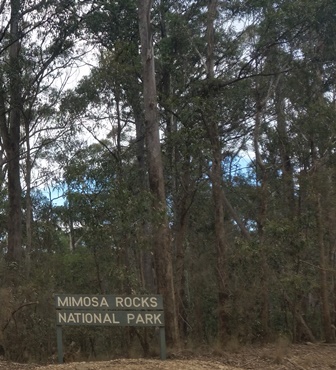 I explored a couple of possible access routes to another summit, without carefully checking the mapping. One route ended at a locked gate and another at a very overgrown fire trail. I have subsequently looked at the maps carefully and now know how to reach the summit (I think) when I am next in that area.

I travelled back to Nimmitabel for the night.