Another detour after a hamfest

I had committed to attend the Moorabbin & District Radio Club Hamfest. My task was to attempt to sell the 2019 Callbook and some other WIA merchandise. I had booked the table and would be manning the table by myself on this occasion.

It was an early start from home and an uneventful drive to the venue in Mulgrave, apart from some light showers for part of the trip. I arrived just after 0900 local and was soon inside the venue and had the table set up. There were plenty of people to talk with prior to the doors opening to the public at 1000, plus a chance for a quick look at the goods on offer on the other traders’ tables.

I spent most of my time talking with people just looking and/or wanting to discuss various issues, or just catching up with amateurs whom I had not seen for some time. The crowd was thinning out after about 1130 but the hall filled up in the 10 minutes prior to the time allocated to the raffle draw: 1230. I had no luck in the draw, as expected.

After the draw, I packed up and headed to the car, exchanging a few more greetings as I did so. I then made my way roughly north to the Monash Gallery of Art. An exhibition of photographs by Peter Dombrvskis “Dombrovskis: journeys into the wild” was in its second last day….. Being so close, it would be a shame not to make the small detour and spend some time viewing the superb images.

During the drive, I had been listening to traffic working some other activators, but I could not hear the activators. I stopped at one point and parked, switching off the vehicle and thus lowering the noise levels in the radio. I worked Mark VK4SMA/p in Mount Barney National Park VKFF-0338 and advised I would be in a Park in about 30 minutes.

I also noticed that I had missed some other activations during the morning and early afternoon – such is life.

Once parked, I attempted to download the kmz file for the Park boundary from ParksnPeaks to my ‘phone, but the outline was not showing. There are power lines running along the eastern side of Beaconsfield – Emerald Road, so I decided to ensure that I was inside the boundary by walking into the reserve to find a spot to set up, giving a little distance from any possible noise from the power lines and some attenuation of vehicle noise from the traffic on the road.

The Reserve extends for about 1.6 km between the Cardinia Creek and Beaconsfield – Emerald Road. The official area according to the CAPAD database is 25.34 ha. It is remnant riparian vegetation typical of what would have existed along creek lines in the area prior to European settlement. There is a network of walking tracks through and on the boundary of the Reserve.

From the parking spot, I walked in about 70 m where I found an opening with a park bench beside an open shelter. I had carried in a folding chair, which I decided to use as the bench seat was wet from earlier rain. The shelter offered some protection if more showers arrived (none arrived whilst I was operating). The bench did provide a convenient anchor to support my small squid pole. I soon had the lightweight SOTA link dipole strung out and erected without the 80 m extensions. 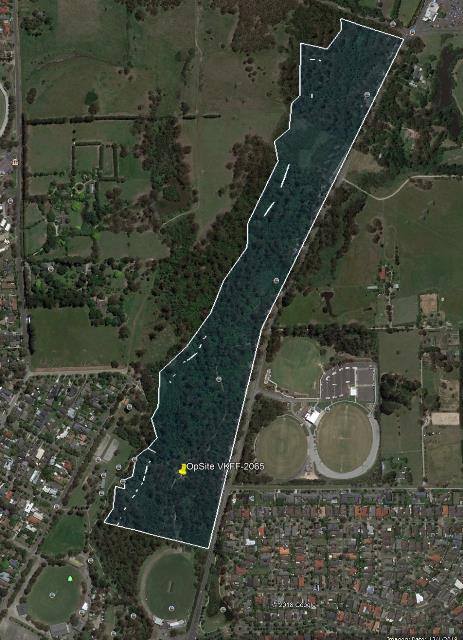 Google Earth view of the Park boundary and my operating site

Once set up, I checked ParksnPeaks and saw that Mark VK4SMA and Mike VK6MB/3 were both on 20 m. I could not hear either of them. I also listed for a JA SOTA station on 15 m, but the signal level was very low, so I decided not to attempt to make a contact. I spotted on 40 m SSB and soon had Hunters calling. Mark VK4SMA/p was number 9 in the log from Mount Barney National Park VKFF-0338, followed immediately by Mike VK6MB/3 in Heathcote-Graytown National Park VKFF-0624. After another 10 minutes of calling, there were no more Hunters chasing. I was about to change the antenna for 20 m when I spotted that another Park was on air, so quickly tuned up to their frequency. I soon had Helen VK7FOLK/p and Jon VK7JON/p in Doctors Rocks Conservation Area VKFF-2902 in the log.

I moved down the band and spotted for 40 m CW. I had 2 callers together, making it difficult to decode either of them. That was soon resolved and I worked Andrei ZL1TM, followed by Cliff VK2NP. I had four more callers on CW, then nothing. I started to change the antenna configuration and then saw a spot for another Park, so quickly changed back to 40 m. Whilst doing so, I found an open link on one side of the antenna, one of the 12 m links!  That would have made the radio’s tuner work harder! Signals were not strong, but I worked Nick VK3ANL/p in Point Cook Coastal Park VKFF-1875. I worked another five stations on 40 m SSB before trying 30 m, working Peter VK3ZPF only – Peter was less than 3 km away. I had no further callers. I saw that Nick was now on 80 m, so quickly ran out the 80 m extensions for the antenna. I worked Nick on both SSB and CW and Nick announced that he would close his station. A VK7 amateur called Nick, who then passed the VK7 to me for another contact. Nick closed down and I took over the frequency and spotted myself, working another three stations before again there were no responses to calls. I reconfigured the antenna to 40 m and soon had another four contacts in the log before receiving a message from northern Tasmania that I was not audible on 40 m. I quickly changed the antenna back to 80 m and worked VK7CW on CW for contact number 44. I returned to 40 m SSB and worked Andy VK5LA, but had no further responses to calls. It was starting to become dimmer as it was now 1647, so I decided to close down.

There had been lots of foot traffic along the walking tracks, so had some short exchanges with the people, including what I was doing. A few of their dogs also approached to say “hello”. The photos were taken as I was packing up, so are not as sharp or bright as they might be otherwise.

The sign at the entrance I used says “Beaconsfield Flora and Fauna Reserve”, but the official VKFF name matches the name on the official databases and GIS files. From the photo of the sign, you can see that the scrub is quite thick, but the walking tracks allow easy access. 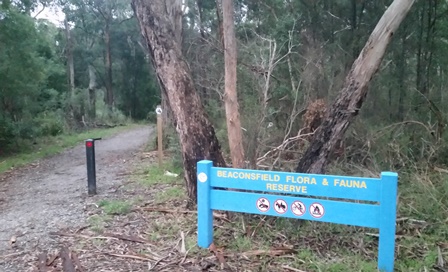 Thanks to the other Activators who were out and also to all the Hunters who called me.