The weather forecast for Gippsland was looking good until late afternoon on the Friday. At the usual informal gathering at the radio club on Thursday night, I asked Ross VK3NRB if he was interested in another day out playing radio in the field. Ross was willing, so we arranged to meet at my house on Friday morning.

We set off via the local Bakery and then to fuel up the car. We then headed past Loy Yang, Gormandale and on towards Yarram. That was when some frustration started: slow traffic from before Gormandale and over the climb up Powers Hill. Then a long stretch of 40 km/h roadworks, with at least 10 minutes stationary at the traffic control point. Then the three slow cars in front of us also took the turn we needed. Ahh….. One must be patient!

When almost down to Woodside, we turned south into Old Rosedale Road and travelled 4.2 km to the southern edge of the target Park.

I believe this was a first activation. I had checked out this park on a previous trip in this area and was aware of a track along the southern edge of the reserve. We drove in about 400 m along the track, disturbing a mob of kangaroos as we proceeded. We found a spot close the top of a small sandy rise and parked off the track. Many of the trees had obvious marks on their bark of animals rubbing against them – probably made by deer. 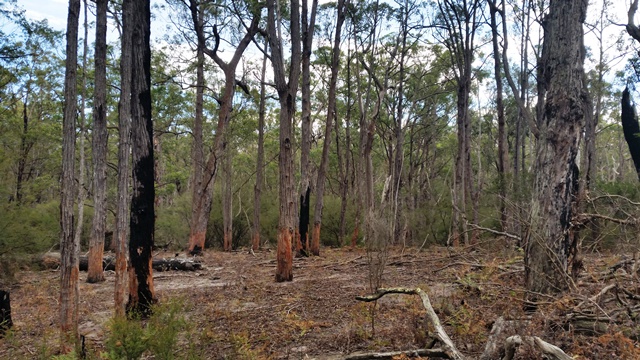 View from close to the operating position

I tossed a line over a tree branch and Ross assisted in running out the ZS6BKW antenna. I again set up using the tailgate of the Ranger as the operating table. I spotted myself on ParksnPeaks at 0051Z and started calling on 40 m SSB.

Tony VK7LTD was first in the log and the calls started coming in. Ross went for a walk out of the Reserve with the KX2 and an unshielded dummy load – enough RF was radiated to enable us to make a contact. After about 15 minutes, I changed to 80 m SSB to work Mike VK6MB/3 at Erica – Mike could not hear us on 40 m. After working Mike, it was back to 40 m SSB. We both worked Paul VK5PAS, followed by Ian VK5CZ. Next was Mike VK6MB/3, this time slightly better than on 80 m – strange propagation! I continued calling on 40 m and worked Allen VK3ARH on VK3/VC-032 on SSB and then CW, plus Ian VK5CZ on CW. I made steady progress and soon had 44 in the log, with Steve VK3KTT/VK3MEG in the log on SSB and CW, and Allen VK3HRA on CW. I dropped down the band and worked Gerard VK2IO on CW. I then tried 20 m CW, working Alan VK2MG and John VK4TJ. I had 49 in the log, plus Ross had at least 10 contacts, so we started packing up at around 0230Z. During the activation, I ducked out of the Reserve to work Ross still inside the Reserve, so managed to Hunt the Park on the same day as I activated.

Google Earth view from the west

We retraced our route back to Old Rosedale Road and then into Woodside, then north-ish on the South Gippsland Highway. We then turned west into Boundary Road and into the next Park.

I have activated this Park previously, but I am not aware of any activations by others. The idea was to get another activation towards a Boomerang Award, plus allow Ross to activate the Park.

We set up just off a track, around 300 m from the southeast corner of the Park. I again used a line tossed over a tree branch and the antenna was strung across the track, with apex at around 10 m up, so we were unlikely to cause any issues should anyone come along the track. As it turned out, we saw nobody whilst there, apart from some trucks travelling along Boundary Road travelling to and from the quarry nearby.

I spotted myself at 0306Z for 20 m CW – convenient, as that was the setting on the radio when I switched it on. I heard Allen VK3ARH calling – very weak, but I made out the callsign eventually. I responded, but Allen must have been having difficulty hearing me, as we did not complete the contact. I soon had Gerard VK2IO and John VK4TJ in the log. After I called a few times with no responses, I moved up to 20 m SSB. I soon worked Gerard and John again, followed by several others.

I moved down to 80 m SSB and worked Mike VK6MB/3, Allen VK3ARH on SSB & CW, and Ross from outside the Park. Next was up to 40 m CW for Alan VK2MG, Allen VK3HRA and John VK4TJ with his extra callsigns. I moved up to 7.144 MHz and soon had another 12 contacts in the log, including Steve VK3KTT. I dropped down to 80 m again to work Steve on SSB and CW, plus Ken VK3UH on SSB. Back up to 40 m SSB again for another seven contacts to bring the total to 47 for the Park. Ross had his 10 contacts, so we started packing up at around 0440Z.

We headed back out to the South Gippsland Highway and then worked our way back to Churchill, arriving home about an hour after leaving the Park.

It had been another good day out playing radio. Temperatures had been in the high 20s all day, but we had enough breezes for things to be comfortable.

Again, thanks to all who worked us during the day.