Saturday was a quiet day, although I did venture out to a local recreation reserve in the afternoon to work Compton VK2HRX/3 on Mt Tabletop. I could not hear Compton on 40 m SSB on the mobile whip and started to set up the portable antenna. I sent a text message asking if 80 m was possible. I almost had the antenna up when Compton signified that he was calling. I could hear him, but it was difficult with band noise. I messaged back indicating the antenna was almost up and finished the installation, changed the antenna connections to the radio and then worked Compton comfortably. It was hot in Wodonga – the high 30s.

Sunday morning I decided to head to the hills, given that high 30s were again forecast. I posted an Alert without checking my notes, posting the reference for the second target summit, not the first…. I left Wodonga at around 0900 local and headed south to Porepunkah and then down the Buckland Valley Road. After crossing the narrow road bridge, I started the climb up Goldie Spur Track to Buffalo Gap, enjoying the views across to the South Face of the Mount Buffalo Plateau when I had the chance. Goldie Track was easy to negotiate. At Buffalo Gap I turned south onto Yarrabuck Track, which became a little rougher and steeper in places, with large spoon drains.

Yarrabuck Track crosses the summit at about 4.6 km from Buffalo Gap.

There is a large cleared area on the summit with some impressive trees and great views to the east. I noticed the Alert error and deleted the incorrect Alert and posted a new one. I set up by tossing a line over a branch and hauling up the link dipole and set up the folding table and chair. I spotted myself for 40 m CW and had four in the log within 20 minutes – a little slow, but the summit was now qualified. I moved up the band for SSB and searched around for a clear frequency – between groups and amateur News broadcast stations, 40 m is often busy on Sunday mornings. I spotted myself and had four in the log inside five minutes, then no responses to calls, so I dropped down to 80 m SSB for only one caller. I moved up to 20 m SSB and soon worked John ZL1BYZ and heard Warren ZL2AJ/m call me. I called Warren several times but he did not respond. Next in the log was John VK4TJ. After several minutes of calling, I saw a Spot from Andrew VK3ARR/p on VK3/VC-032 on 40 m, so dropped back down to 40 m and made the S2S contact. I then worked Mark VK4SMA/p in Springbrook Conservation Park before I packed up and resumed the journey south.

A new Activator Unique and a Complete for me.

The rest of the track heading south was a little rougher in places: in addition to the usual spoon drains, there were some rough rocky and rutted sections.

The next summit was just under 9 km further along Yarraback Track. 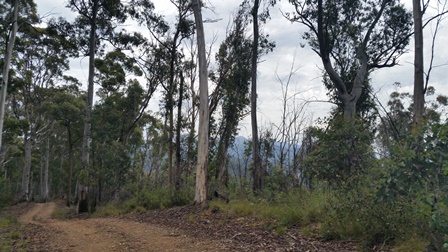 The summit has a little space beside the track. I set up in a similar fashion to the previous summit and looked at SOTAwatch before I spotted myself. I saw that Dan ZL4DVG was on a summit on 40 m CW. I tuned to his frequency and could hear him 539 and called him a couple of times without any response. I moved up a little in frequency and spotted myself for 40 m CW. In about 12 minutes I had 5 contacts in the log – summit qualified. I moved up the band and spotted for SSB. I worked six stations in less than 10 minutes. It was now after 1300 local time, so I packed up and moved on.

A new Activator Unique for me.

I continued south and on to Buffalo Range Track. About 5 km south of the last summit, I could see the old track up to the next summit. A new track contours around the summit on the eastern side. The old track looked quite rough and steep, so I decided to check the southern side. About one kilometre on I reached the southern end of the old track, which looked somewhat over grown and some fallen timber. I parked the car and loaded up the rucksack.

The climb to the summit was around 500 m horizontally and about 100 m vertical climb, taking just over 30 minutes. I set up and worked Mark VK4SMA/p, now in Nerang National Park. I moved down the band and spotted for 40 m CW. I had a steady stream of callers, working 8 stations in around 20 minutes, including Andrew VK3ARR/p on VK3/VC-007 for another S2S. I moved up the band and spotted on SSB, working nine stations in around 15 minutes.

A new Activator Unique and Complete for me.

I packed up and quickly descended to the car – only about 15 minutes for the downhill trip.

I loaded up the car and continued along Buffalo Range Track. The next summit was just over 7 km south and east.

I again set up like the first two summits. I spotted for 80 m SSB and soon had Tony VK3CAT in the log. Eight minutes later, there were five in the log and no further callers. I moved up to 40 m CW and spotted. The next fifteen minutes or so saw another 10 contacts in the log. I also heard Geoff VK3SQ call me, but he did not respond to my calls.

I gave up calling at around 1630 local – the summit was well qualified on both CW and SSB and I had a long drive back to Wodonga in front of me.

A new Activator Unique and Complete for me.

I packed up and continued south. I took a chance and turned into Twin Creeks Road to descend to Mount Selwyn Road and on to Buckland River Road and eventually back to Porepunkah and then back to Wodonga.

Thanks to all who chased today. It was a busy day for me, gaining me four new Activator Uniques, three Completes and 30 Activator points.