I was awoken by a single ring on the landline telephone….. I have no idea of who it may have been, but arose and started getting organised. The weather forecast was for more rain, but I decided to head out for some more Parks activations.

I travelled to Rosedale, with a stop at the bakery to grab some food for later. I then headed south and then south east towards Stradbroke, and into the Holey Plains State Park.

I entered the Park via Holey Hill Track and drove up to Holey Hill. I set up in the picnic area, using a tree branch to support the line for the dipole centre.

Prior to spotting myself, I had a quick look at ParksnPeaks (PnP). I soon had Rob VK2QR/5 in VKFF-0886 and Gerard VK2IO/p in VKFF-0558 in the log. The usual area for Parks activity on 40 m in VK is around 7.130 to 7.150 MHz, but Sunday morning sees several amateur radio News broadcasts taking place in that region. I found 7.120 MHz was clear, so spotted myself there. 30 minutes of operating saw me with a total of 16 contacts in the log, including Park to Park contacts with Liz VK2XSE/p in VKFF-2642 and Paul VK5PAS/3, Peter VK3ZPF/p and Marija VK5FMAZ/3, all in VKFF-2152. With the Park qualified for VKFF, I packed up and headed back to the sealed roads.

Once back on Rosedale-Stradbroke Road, I headed east via Taylors Lane and then Gormandale-Stradbroke Rd until I reached the South Gippsland Highway. I turned south until I reached Bif Tower Road and proceeded on that road until I was at the next Park boundary. I explored a couple of possible sites but had no mobile phone coverage at the site tried, so I headed back to the Highway and south to Boundary Road and drove in to the southeast corner of the Park and found a spot to set up.

I had activated this Park in late September, working 24 Hunters, so I really only needed 20 more to get me to the WWFF qualification level. 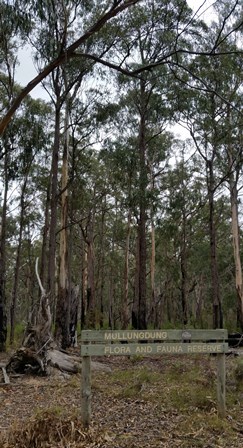 I started on 80 m and spotted myself. Several minutes of calling yielded no results, so I called a local via the UHF repeater. I soon had Ken VK3UH in the log. With no more responses, I reconfigured the antenna for 40 m.

I packed up and headed back to the South Gippsland Highway and headed in southerly direction to Woodside and just beyond to the next target Park.

I looked at the Reserve from the highway along the east boundary and returned to the northern edge and a track that enters the reserve. The Park sign says But But Flora Reserve, but the maps say Bruthen Flora Reserve. 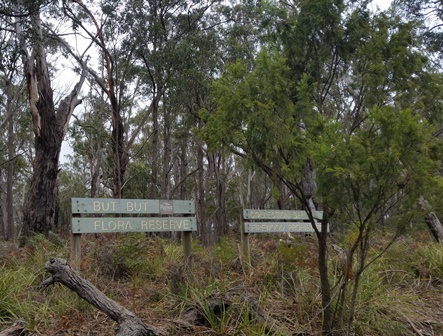 Bruthen / But But Flora Reserve signs

The Reserve is just over nine hectares in area. The name on the sign is the old name for the Reserve, after a species of Eucalypt growing in the area, Apple Box or But But, E. bridgesiana. The Reserve is predominantly woodland with a swampy area in the north east corner. As I was exploring the northern boundary of the Reserve, I saw a group of three kangaroos heading away from the vehicle.

I spotted a likely branch and tossed a line over the branch to lift the dipole. I then explored along the track a short distance before turning around and parking beside the line.

As I was running out the antenna, the neighbouring farmer drove up on the other side of the boundary fence. He stopped for a chat and I explained what I was doing. The farmer (Alan if I remember correctly) explained a little about the Reserve before climbing over the fence and we sent some time searching for the small endangered orchid without any luck. Alan returned over the fence to continue looking for a fault in the electric fence.

I finished setting up and started on 40 m just before 0400Z. The initial approach was to look at the spots on ParksnPeaks and see if I could hear those spotted. The result was four Park to Park contacts as the start to my log. I found a clear frequency and spotted myself before calling. The Hunters soon found me. I took a brief excursion in frequency to work Rob VK4AAC/p in VKFF-0187 before returning to my spotted frequency. All was okay for a while, until someone started whistling and calling “Test, Test” and did not respond to a couple of prompts from me and another station that the frequency was in use…. So I moved up the band a little.  I swapped to 20 m for a while just after 0510Z and was rewarded with calls from several Hunters and a couple of Park to Park contacts. I had also grabbed the CW paddles from the container in the back seat, so I managed some CW contacts as well, helping the tally. I dropped down to 80 m and spotted myself, being rewarded with four more contacts, including Paul VK5PAS/3 and Marija VK5FMAZ/3 in VKFF-0628, who worked me with their mobile set up. I returned to 40 m for a few contacts, including two more Park to Park contacts. I decided to close at around 0625Z, with 50 contacts in the log, including 13 Park to Park contacts.

Just after I had worked Paul and Marija, the Police drove past on the Highway. The clearly saw me parked and they stopped, reversed and drove in to a few metres in front of my vehicle. I announced on-air for Hunters to please standby by and I then exited the car. The Police state that they rarely see anyone at the location. I started explain what I was doing, that I am a licensed radio amateur operator, what is amateur radio, what is WWFF, etc…. After several minutes of discussion and my descriptions, I feel something odd at my waistband, then something sharp…. I find that I have large bull ants biting, which induce odd movements on my behalf whilst trying to talk with the officers, one male and one female. I try to explain – ants! Shortly after, the male officer excuses himself as he feels an ant inside his trousers…. I show them the gear, The PnP site on the mobile phone, my log on my tablet. I think that I am making sense when I hear Allen VK3ARH call me on spec. on the radio. I excuse myself and complete the contact with Allen. I think that this finally makes things clearer for the officers and they leave, having taken some notes and my details. Once they have left, I return to the radio. With no replies to calls on 80 m, I change to 40 m for a few more contacts on before I pack up and depart. I had 50 contacts in the log, with 13 Park to Park contacts.

I was home in just under one hour.