The weekend of 25/26 November was the designated VKFF activation weekend for the year. It is an interesting weekend, with many activators out in Parks. This year, Alerts were posted on ParksnPeaks for around 60 VKFF References to be activated.

Locally, the weather forecast was for a hot day with afternoon thunderstorms. I considered the forecast before deciding late on Friday evening to go out Saturday morning. The plan was to head to three of the Nature Conservation Reserves added in August.

I awoke early and got underway. The route plan was to head toward Briagalong. I was aware of significant areas of the Princes Highway which had rod works occurring, so after Rosedale I headed north to Tinamba, planning to then head east to Maffra and on to the planned Park. Driving north, I was looking up at the hills to the north and west: Ben Cruachan, Gable End and many others were clearly visible. Just as I approached the roundabout in Tinamba, I changed my mind and headed straight ahead toward Newry and then on to Valencia Creek.

From Valenica Creek, the approach is relatively straight forward, although with many twists and turns. Head northwest on Wombat Road which then heads south and then west before a low level crossing of the Avon River before a short section heading west and then north. When you get to the start of the forest on the west of the road, turn left into Mount Angus Track. After about 540 m, turn right to continue toward Mount Angus. As you climb, you will encounter many large spoon drains, plus the track is likely to have scattered fallen timber and small rocks. My first activation of the summit used the same approach in the old Subaru Forester. About 13.2 km after leaving Wombat Road, you eventually reach the track junction of Mount Angus Track and Avon Track. Veer right and then drive onto the helipad on the actual summit, which is inside the Park boundary.

I tossed a line over a tree branch and hauled up the antenna and feedline prior to running the link dipole legs out parallel to the track. I set up on 40 m initially. I had weak mobile reception so was able to self-spot. Gerard VK2IO was first in the log followed by two more callers. Several minutes of calling produced no responses, so I changed the antenna to 80 m. I worked five stations on 80 m, including Mick VK3PMG/p in VKFF-2146. With no further responses to CQ calls, I switched back to 40 m to chase Garry VK2GAZ/p in VKFF-0041, Tony VK7LTD and Angela VK7FAMP/p in VKFF-1797. After working three more stations, CQ calls went unanswered, so I switched to 20 m. Calls here results in contacts with ZL, VK7 and VK5. After more unanswered calls, it was back to 80 m to work Mitch and Geoff, then back to 40 m. Hunting around and calling resulted in P2P contacts with Gerard VK2JNG/p in VKFF-1967, Paul VK5PAS/p and Marija VK5FMAZ/p in VKFF-0911, Jon VK7JON/p and Helen VK7FOLK/p in VKFF-1829, plus several other hunters. The final contact here was a S2S and P2P with Warren VK3BYD/p on Mt Piper VK3/VN-028 and VKFF-2155 on 80 m CW.

I then packed up and retraced my route back to Valencia Creek and then headed to Briagalong. Perhaps I made a poor route choice here, as I worked my way across to Gorge Road only to encounter a Road Closed sign as I reached Freestone Creek. I slowly drove on along the track and easily crossed the gravel ford and then straight into the middle of Briagalong.

I stop at the local café to buy some lunch was followed by a trip south and then east to the next target.

This reference had not previously been activated. I approached along Freemans Lane, turn into Swallow Lagoon Road and spotting a locked entrance gate opposite the junction with Andrews Road. I parked here and noted a pedestrian access gate.

I grabbed some gear and set up about 5 m inside the gate, again throwing a line over a tree branch to lift the dipole centre. The dipole was run out parallel to the fence.

The last 30 minutes or so had the sounds of thunder in addition to the bird calls, so I decided to pack up as the rate of answered calls was very low. I had 36 in the log, but hoped to activate at least one more Park for the day.

I drove east along Andrews Road to Munro, then south to the Princes Highway to head toward Bairnsdale. I then took the Dargo and Glenaladale turnoff to head to Fernbank.

This Park is behind the Fernbank Recreation Reserve, which looked rather neglected. My earlier investigations of this park suggested that access might be easiest from the track running on the southern side of the railway line. These thought proved to be correct: at the western end of the reserve, there was a track into a set of bollards at the reserve boundary. I parked here and walked in about 30 m to set up. This reference had not previously been activated. 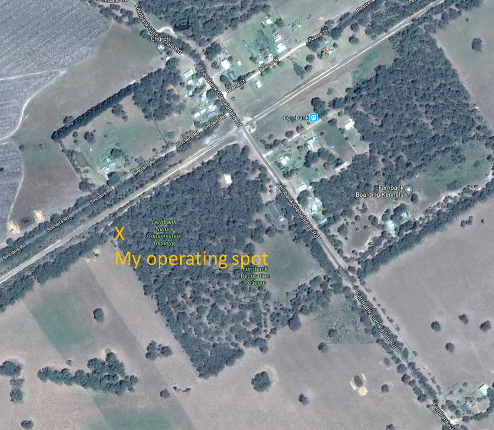 As I approached Fernbank, I could see some large thunderstorms to the north….. The activation was to have a background of thunder and birdsong… Once set up, I was able to log Liz VK2XSE/p in VKFF-1269, followed a few minutes later by Jon VK7JON/p and Helen VK7FOLK/p in VKFF-1802. Several minutes of calls then went unanswered before I worked Dave VK2ZK/p in VKFF-1348, followed by Gerard VK2JNG/p in VKFF-0492. A couple of minutes later were Marija VK5FMAZ/p and Paul VK5PAS/p in VKFF-1639 and then Gerard VK2IO/p in VKFF-0041. A couple more contacts were made before I saw a local walking along to investigate the voice he had been hearing. I explained the VKFF and WWFF programs and even made a few calls. I then switched to 20 m, yielding only Rick VK4RF. The thunder was getting louder and I had 13 in the log, so I packed up and headed back to the bitumen and back to the highway.

Once on the highway, I headed east to the Lindenow turnoff and headed south toward Meerlieu, then east on Boundary Road.

This was another reference which had not previously been activated. My mapping showed the reserve boundary starts at the junction with Swindlers Road. But this road had a locked gate, plus the reserve had no signs. The start and end of the reserve was obvious, plus it showed on the mapping on the vehicle GPS system. I drove along to the eastern end and parked beside the locked gate. I walked in about 100 m and set up.

First in the log were Paul VK5PAS/p and in Marija VK5FMAZ/p VKFF-1122 on 40 m. I worked three more Hunters before I worked Tony VK7LTD/p and in Angela VK7FAMP/p VKFF-1825, followed by Gerard VK2IO/p in VKFF-0041. Shortly thereafter I worked Gordon VK5GY/p in VKFF-1086. I tried 20 m with no responses to calls and also tried to work Peter VK3TKK/p in Organ Pipes National Park. I could hear Peter, but he had S7 noise and could not hear me. I gave up when it started to rain – the thunderstorms were almost upon me. I had 10 in the log, so at least I had the Park qualified for VKFF.

I loaded up the vehicle and headed for home, with many dark clouds visible dumping rain and with the occasional lightning display. I was a bit slack about taking photos during the day as I was too focussed on the radio activity and driving.

Sunday was rather wet, so I decided to hunt from home. Propagation had been up and down all weekend, so only a few activations were worked from home.