I had spent the weekend in Wodonga with family events. Most of Monday was spent proof reading the March issue of Amateur Radio magazine. I decided to head for home on Tuesday, with a detour to Heathcote to pick up some spare parts that I had purchased.

I was finally away from Wodonga at around 1000 local, and drove down the Hume Highway to the Puckapunyal turnoff south of Seymour, then across to Tooborak and then up to Heathcote. After picking up the goods, I drove into town to buy some lunch and then decided to attempt to get to Mount Cobaw, even though I did not have detailed paper maps with me. I drove down to Mia Mia and then turned east and then south on Burke & Wills Track – a sealed road that travels to Lancefield.

When the road reaches the top of the climb up Cobaw Range, turn right into Ridge Road – the junction is a short distance south of the Prosts Road junction. You enter an area which was burnt in October 2015. I started to continue along Ridge Road, but it rapidly became very rough, so I retraced my tracks a short distance and took Reillys Road to Pendergast Road, following the sign saying Ridge Road Extension, and then left into Ridge Road. I found Camp Track, which I knew from “map memory” was a possible approach route. It very quickly became very rough – definitely not suitable for the Impreza!

I had not read the summit notes by Wayne VK3WAM or Allen VK3HRA/VK3ARH. However, I had examined what looked to be a feasible route on my electronic maps. From Camp Track, I continued west along Ridge Road to next vehicle track on the left, at 37.2276 S 144.6275 E. This unnamed track was very rough only a few metres in from Ridge Road, so I parked the car and loaded up.

The approach to Mt Cobaw

The track climbs steeply about 55 m metres in 500 m to the top of the knoll and I then followed a track clearly used by motor bikes a little way along the spur. Once the tracks headed off the spur line, I simply navigated along the spur into a saddle and then climbed up to the summit, finding the well-defined track that runs north-south across the summit area. My approach route was 1.5 km from the vehicle, which could be reduced to 1 km if you had a capable 4WD vehicle to get to the top of the knoll. The approach included 91 m of ascent and 27 m of descent.

Terrain on the approach and descent

The route was through open forest with bracken and grass, with lots of granite boulders and some fallen timber to navigate around. It was possible to follow animal pads for most of the route. I almost stepped on an echidna, who was hiding in the grass – clearly my approach had been loud enough!

An echidna trying to be incognito

I setup close to what appeared to be the highest point, simply throwing a line over a tree branch to get the dipole centre up at about 4 m. 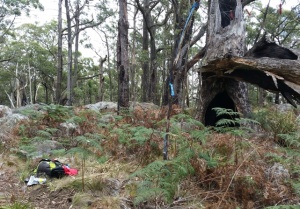 As I was stringing out the dipole legs, I remembered to post a Spot to SOTAwatch at 0339Z. Once set up, I called a couple of times on 7090 kHz. John VK3YW was first in the log, with Steve VK7CW calling in whilst we were chatting. Steve was followed by Adrian VK5FANA and then Adam VK2YK called. He was strong to me, but I was not strong to him, so it took a few attempts for him to receive his report. The summit was qualified – another Complete. I called for several minutes without further replies, so I switched off at around 0400Z, packed up and retraced my route back to the car. It was rapidly cooling down and I still had a long drive ahead.

The drive back was simple, with the challenge being to make a decision of how to get across Melbourne and suburbs in afternoon peak traffic. I arrived at home just before 1900 local.

This entry was posted in SOTA and tagged Mt Cobaw, SOTA, VK3/VC-015. Bookmark the permalink.