Despite the long Friday, I woke at a reasonably early time and checked the weather forecast – possible late showers. I decided to attempt to rack up some more WWFF activations. I packed the car and headed east, with a stop at Rosedale Bakery to buy something for breakfast and lunch. It was then on to Longford and Loch Sport, into The Lakes National Park.

I had previously activated this Park during the 2012 Keith Roget Memorial National Parks weekend. With 28 contacts in the log, I needed another 16 to make it to the 44 required for WWFF qualification. I drove to the car park just beyond the Lookout Tower (38.016418° S 147.639520° E) and set up the station. The weather was fine and warm, but with smoke haze from the various planned burns in the region. Information on the Park can be found at http://parkweb.vic.gov.au/explore/parks/the-lakes-national-park 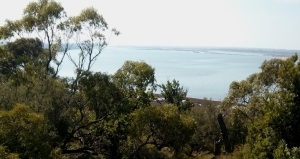 The view across Lake Reeve

I packed up and headed back through Loch Sport and along to Spoon Bay Track and then Lakeside Track to a quiet spot just beyond the busy Spoon Bay camping area. 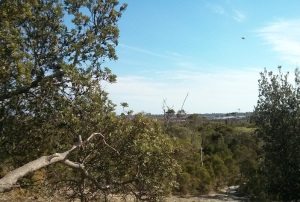 The view across the western end of Lake Victoria from the operating site.

This is another of the new WWFF References in Victoria. There are many options for operating in this Park. You can find details at: http://parkweb.vic.gov.au/explore/parks/gippsland-lakes-coastal-park

I was set up by around 0200 Z and Andrew VK3BQ/p (still at Mount Arapiles) was first in the log, followed by Mark VK3PI/p on Mount Hickey VK3/VN-015, both on 40 m. It was then a mad scramble to try to catch Brian VK3MCD/4 on a summit, but he could not hear me on 15 m. I tried changing the 40 m dipole legs, which brought Brain up from S2 to S5. Just as I got back to the microphone, Brian went to 20 m. I quickly changed the antenna to 20 m, but still no luck. I missed him! I went back to 15 m and worked Rob VK4FFAB before going back down to 40 m. Amanda VK3FQSO was next in the log, followed by Johnno VK3FMPB/p in Kinglake NP VKFF-264. It was then a steady run of contacts including Kevin VK3KAB/p on VK3/VE-060. RRT alerted for Brian on a new summit, so I switched back to 20 m and this time worked Brian on VK4/SE-118, plus another 3 stations worked before going back to 40 m.

First in the log on this burst on 40 m was Doug VK2FMIA/p in VKFF-034, followed by Nick VK3ANL/p in VKFF-630 and Mick VK3PMG/p in VKFF-772. Contact density was dropping off. I closed after working VK7EK at 0516 Z, then packed up and along Lakeside Track to Seacombe Landing Road and then onto C485 – the Loch Sport road – then back to Longford and the Longford-Rosedale Road.

After Longford, I took Cheesum Road, then Seldom Seen Track to Holey Hill Track and up to beside the fire watch tower at the summit of Holey Hill.

Yet another new WWFF Reference. I could not pass it up, as this Park is only a few kilometres off my route home after the earlier Parks. Cheesum Road was a little rough in places, with washouts of the road due to the sandy soils. Park details at: http://parkweb.vic.gov.au/explore/parks/holey-plains-state-park

There was a group of guys camping near the summit of Holey Hill. I noted that they had tied a ladder to the tower, allowing them to climb around the locked access hatch! I parked near the fire tower and set up with the antenna hopefully in a direction for Europe. I spotted myself on 14.315 and promptly worked Adam VK2YK. Then RRT announced a spot in G, so I checked the details and moved up to 14.331 to work Mike 2E0YYY/p on G/SP-017 at 59 both ways. I moved back to 14.315 and next was Xaver DK4RM followed by a weak VK3DAC – a very good distance for ground wave! Next was Greg VK4VXX/p in Noosa followed by John VK6NU/p on VK6/SW-031. Then it was another case of the EU pile up! At around 0723 Z, it was like a cable had been cut – no more EU calls. I worked Paul VK5PAS/p in VKFF-781 while he still had propagation to EU, after which I dropped down to 40 m to work Doug VK2FMIA/p in Tapin Tops NP VKFF-477. It was starting to rain and contacts were becoming hard to get, so I started to pack up. Just as I was about to drive off, RRT announced a VK6 spot at around 0600 Z, so I quickly got the antenna back up and switched the radio to 15 m to work Lewis VK6FLEW/p on VK6/SW-064 with weak signals, using the 40 m dipole on its third harmonic. Lewis was contact number 49 and was a fitting end to the day. I packed up and then headed back along Holey Hill Track to Rosedale Stradbroke Road and headed back to Rosedale and then home. It was just after sunset, so care was needed to watch for kangaroos – I spotted several on the road ahead.

Despite the damp roads, hopping biological hazards and the fading light, I made it home without incident. Another satisfying day out playing radio!