A trip to the Prom

The weekend of 16 & 17 November was promoted as the third Activity Weekend for the Keith Roget Memorial National Parks Award (KRMNPA) by Amateur Radio Victoria. There were many amateurs planning activations over the weekend around Victoria, predominantly in the north and west of the state. There were no activations planned of the parks in the far east of the state – I activated 8 National Parks on the corresponding weekend in 2012 and need to work amateurs in three of those eastern Victorian Parks to have worked (chased) all 45 Victorian National Parks. (If you are heading to East Gippsland, please consider activating Errinundra, Coopracambra, Lind and/or Alfred National Parks – I suspect many need these parks. Of course, there are other Parks as well. Lind and Alfred cross the Princes Highway. Coopracambra is just east (only 100 m) of the Monaro Highway.) (Update – only 2 now needed: Coopracambra & Errinundra – Thanks to Mike VK3XL/m who I worked in Alfred NP on 30 November 2013).

I decided to head to Wilson’s Promontory National Park on the Sunday, with the aim of activating Mount Oberon.

View down to Tidal River from VT-060

Tidal River is a drive of just over 2 hours from home and I was under way by just after 0700 local. The drive down was uneventful, with a stop to grab some lunch in Foster en route. When I reached the Mount Oberon turn off, there were signs were up “Road Closed”. Parks Victoria run a shuttle bus from Tidal River to the Mount Oberon car park (actually Telegraph Saddle) from the first weekend in November until Easter. I did not check if it runs on weekdays outside of the popular holiday times, but it was running on this fine Sunday. You can choose to park in the Overnight Hikers Car Park, or at the Norman Bay Car Park. The bus runs roughly every 30 minutes, with the last return departure from Telegraph Saddle leaving at 1630. The schedule is listed at the bus stop in the Norman Bay Car Park and probably in the Tidal River information centre. 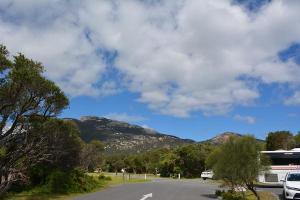 As I was approaching Tidal River, I managed to work Ben VK3FTRV/p in the Grampians National Park for a Park to Park contact. I parked in the Norman Bay Car Park and only needed to wait about 15 minutes for the bus to arrive.

Telegraph Saddle is at 200 m ASL, with the Mount Oberon summit at 558 m, so there is a climb of 358 m over about 3.4 km. The route is simple – just walk up the formed road to the telecoms compound area below the summit, then climb steeply up the formed pathway and steps to the summit, with the vertical drop off sections having guard rails.

I took my time climbing up the road – the day was warming up rapidly. When I arrived at the summit there were only a few people on top. I chose to set up on the actual summit, using a scrub to support the small squid pole. The dipole legs ran roughly north – south, with the southern half along the edge of the line of scrub and the northern end out onto the granite rock edge. In hindsight, I probably should have set up on the small shelf to the north and only about 4 m below the summit, but I did not spot this shelf on the way up. But I had the chance to explain what I was doing to many people during the 2 hours that I was active on the summit…..

First contact was with Peter VK3ZPF/p on Mount Ida VK3/VU-009 in the Heathcote-Graytown National Park. Signals were marginal – 41 both ways. I then realised that the FT-817ND was set to its lowest power setting! I had swapped radios before the trip and the ‘ND had been doing transverter driver service with my microwave gear. I quickly changed power up to 5 W, making things easier. 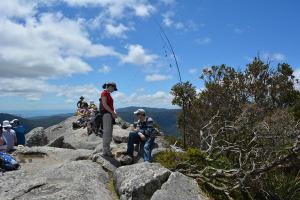 The antenna and some of those on the summit – lots of non-amateurs with whom  to discuss my activities!

I made a total of 6 S2S contacts (only 4 different summits) and a total of 25 contacts over the time on the summit. Mobile coverage appeared to be intermittent and I missed some of the other national parks and conservation parks that were activated whilst I was set up on top. I packed up a little after 1340, and heading back down to catch the shuttle bus.

Back to the car park and load up the car and then headed back towards Foster.

I parked on the lower section of the turn-around/parking area, and then climbed up the very rough remnant of a 4WD track to the summit trig.

At the summit is a trig point, a seat, some signs for the walking track and a viewing compass – a convenient support for the squid pole and an operating table.

I quickly worked 14 stations in 20 minutes, then packed and walked down the walking track for a slightly different route – through the trees and shrubs and out of the sun.

It was into the car and off to Traralgon for a Parks Victoria “Friends” BBQ and to catch up with lots of people.

A good day out.