On Friday 11 October 2013, I had a specialist appointment in Melbourne’s eastern suburbs – the regular six-month visit to the allergist. This looked like an opportunity to tackle some SOTA summits after the appointment, so the gear was packed in the car.

The first task was to drive to Wantirna and to park in the McDonald’s car park prior to grabbing a coffee. I also organised to meet Andrew VK3BQ, so that I could deliver a squid pole – I still had a couple on hand after purchasing a box of them earlier this year. After enjoying the coffee and a having a chat with Andrew, it was off to see the doctor.

By mid-morning, I was on the road heading to Healesville. I stopped to grab some food for lunch and turned on RRT, to find that Heath VK6TWO/3 had just been spotted on Mount Macedon VK3/VC-007. I installed the mobile 40 m whip on the car and made a contact with Heath and then briefly discussed his plans. That made up my mind for my first target – Heath and Ron VK3AFW were willing to hang about on Mount Macedon until I got to Mount Dom Dom. So it was time to resume driving, out into the traffic and up the Black Spur to Dom Dom Saddle, then briefly along Road Eight, and left into Dom Dom Road.

I parked near the eastern end of the old logging coup, just near the start of a steep logging track. A quick change of clothes and footwear was followed by a steep climb up along the logging access track, with some diversions along the way around fallen trees or logs that had been left behind. There was little difficulty in navigation – basically upwards until the track flattened out on the spur to the east of the summit. The task was then to navigate toward the summit. Close to the edge of the logged area was very thick, but just little further north the undergrowth was thinner and allowed for easier progress most of the time. I stopped at about 10 m vertically down from the summit, around 130-140 metres from the true summit.

I set up with the small squid pole plus the new lightweight multi-band link dipole, and worked Ron and Heath on 40 m immediately after turning on the radio for 2 S2S contacts. Also in the log were Ernie VK3DET, Tony VK3CAT, Marc VK3OHM, Paul VK3PAS, Bernard VK3AMB, Andrew VK3ANL/QRP and Rod VK2TWR. Not bad for early on a Friday afternoon without having posted an Alert of my intentions! No Alert was posted as I was uncertain of timing and likely destination/s. After 15 minutes of activity, I put out a few more calls with no responses, so packed up and started heading back roughly along the route taken up the hill.

I veered a little further left on the way back to the logging track and the walking was even easier, but still moderate growth (mainly ferns and some scrub, plus the occasional fallen timber). I started down the track but lost it about one third of the way down. I did pick up another logging track and progress was fairly quick. At about half way down, I stopped briefly after having climbed over a log and noticed something unusual in the periphery of my visual field – a strange brown coil. It was a snake, coiled up enjoying the sun, looking at me from about one metre away. We watched each other for about a minute and I scanned to my left – the right was blocked with scrub & fallen timber. All appeared clear, so I took a step to the left and the snaked zapped off to my right. I was sure to scan the ground more carefully after that little encounter! Note to self – time to pack the gaiters in the SOTA pack and to wear them!

The rest of the descent was uneventful. There was plenty of noise coming across the valley from an active logging coup near Carter Gap. With loggers active in that area, the option of an easy approach to Mount Vinegar was ruled out. Back at the car, then drive back to Dom Dom Saddle, then north to Narbethong and then toward Marysville.

Mount Gordon Road branches off the road to Marysville (C512) almost opposite the sign to the Trout & Salmon Farm, a convenient landmark. The road up was in good condition, with a few small fallen trees making only partial obstacles.

I parked at the switchback corner that is also the junction of Mount Gordon Road and Woods Lookout Track, at around 725 m, comfortably outside the activation zone. As shown in Andrew VK1NAM’s blog, the gate across the summit track has been wrecked by someone without a key who was intent on driving to the top. It is about 400 metre walking up the track to the summit at 762 m. 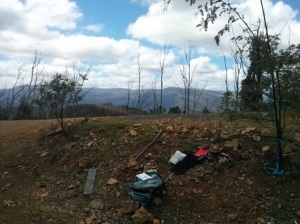 I set up the small squid pole using a acacia sapling as the support, utilising the slope from the ground down to the track as an operating table.

My first call on 40 m was quickly answered by Marc VK3OHM, with a dozen more calling me in the next 16 minutes. Once again, a couple of further calls went unanswered, so it was again time to pack up and head down to the car. I did not think to try any other bands, but at least this time I remembered to take a photo.

Once back at the car, it was back down to the bitumen, then to Marysville and up to the Lake Mountain Ski Resort car park.

I had previously activated this summit, a year earlier – also after a visit to the allergist. Having skied here many times in the past and with no snow on the ground this time, I headed directly up the Royston Gap Road (Royston Trail – the entry has a gate across the road) to ward Triangle Junction.

From the car park, it is about 2 km up to Triangle Junction, climbing about 90 m vertically. The surface is good walking – a mixture of gravel and grass, with some fallen bark and small timber in places – the previous week had been very windy. 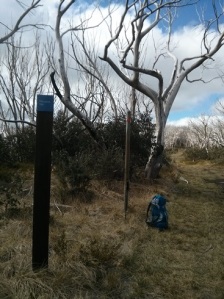 I set up only about 60 m or so along Panorama Trail – Triangle Junction is comfortably in the activation zone of the current summit location. The summit will move about 1.5 km further north at the next VK3 update, but should still be easy to access along the ski trail network.

I used one of the trail markers to support the squid pole and ran the dipole along the edge of the trail. First up this time on 40 m was Tony VK3CAT, the first of 13 contacts. All were on 40 m except for one contact made with Bernard VK3AMB on 12 m. It only took a couple of minutes to lower the squid pole, to break the appropriate link and to raise up the pole prior to making the contact, then another couple of minutes to go back to 40 m. Once again, the activation was fairly quick, with only about 15 minutes operating time in the log. As per usual practice, I called a couple of times without further replies before I switched off. A bonus this time was a contact with Ron VK3AFW, who had dropped into Organ Pipes National Park on his way home from Mount Macedon. One more National Park chased for the KRMNPA. Speaking of the KRMNPA, Federation Range is inside the Yarra Ranges National Park. 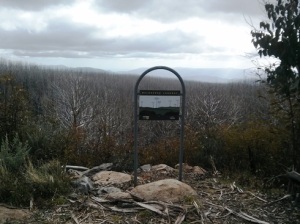 After packing up, it was back to the car, stopping briefly to take a photo across the valley to the west towards Melbourne – there is a convenient signpost which indicates some of the peaks of interest, including the 2 summits activated earlier in the day.

By the time I was back at the car, the wind was blowing quite strongly and it was around 1615 local time. I considered my options and decided to call it a day. After a conversation on the telephone with Rod VK2TWR, I headed back home via Marysville, Healesville and Pakenham. Patience was important during the drive – slow and selfish drivers who will not pull over to allow accumulated traffic to pass can be very annoying!

An enjoyable afternoon with 2 new Uniques activated (and summits completed) and a total of 19 points earned.