As SOTA works on UTC days, and activators can only claim points once per UTC year, January 1 2013 was the first opportunity for VK activators to make a double dip: Be on a summit and qualify it before 2359Z (1059K) for the points, and then do it all again after 0000Z for another lot of the points. In addition to myself, we were expecting Allen VK3HRA, Ron VK3AFW and Wayne VK3WAM to be on SOTA summits.

I left Wodonga at about 0735K and had an uneventful drive, apart from the large numbers of cyclists climbing the Mt Buffalo Rd. Fortunately they were in small bunches
and one simply needed to wait until you could see that the road was clear to
pass them. Arrived at The Horn car park at about 0930. Loaded up the pack and
was on the summit and set up by 1000K. Strapped the squid pole to the guard rail
in the NW corner. Simply lowered the coax outer side of the dipole over the
cliff, and strung out the active side to a point lower down the guard rail on
the final ascent.

The mast tied into the guard rail corner, with half the dipole simply hanging over the side.

The viewing compass made for a convenient operating table:

The other dipole leg can just be made out running down to the corner of the guard rail, behind the iPad.

First contact was made at 2305Z and Wayne VK3WAM/p was contact #13 at 2355Z. Given Wayne was running late, I left him to use the frequency & he quickly qualified his
summit before the end of the UTC day. I had also caught Ron VK3AFW/p on Donna Buang.

In the New Year (UTC), I worked 9 stations, including repeat S2S contacts with
Wayne & Ron.

I spent some time explaining SOTA to some of the tourists. Once that was done,
it was after 1130K and a quick call yielded no replies, so I packed up & headed
down to the car.

View from The Horn to west of north: the access road is visible, as are The Cathedral and The Hump VK3/VE-019.

Once in the car, I thought about options and decided on an unannounced
activation of The Hump VK3/VE-019.

The climb up The Hump / Cathedral Track was easier than my previous visit – the rocks were dry & there was no snow like in September, when I first activated the summit. This time I climbed to the high point at the northern end – not the peak, but within the activation zone. First contact was with Paul VK5PAS at 0159Z, cut short by the unsecured squid pole blowing over in the wind. I attempted to secure the mast a little better by using a luggage strap – it seemed to work. Made 4 further contacts after securing the pole, including a S2S with Allen VK3HRA/p on Mt Lang. As I was now well behind my scheduled departure, I left Allen with the frequency, packed up & descended to the road. Sorry if some of you were looking for me! I was expected back in Wodonga mid-afternoon, so did not hang about. I almost forgot to take a photo. Here is the view out to the north east, with the squid pole collapsed down and the dipole wound up: 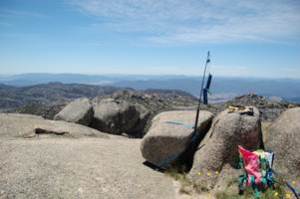 I had a late lunch at Myrtleford en route & heard Ian VK3TCX calling Ron VK3AFW/p on Mt St Leonard as I approached Yackandandah. I pulled into a side road but could not hear Ron well with the mobile whip, so put up the portable antenna to make the contact with Ron for some more chaser points.

It was fun with the high level of activity, with three SOTA stations operating summits for the double dip chance. Stations cooperated well and let chasers known where to find the others. For me, a good day: 30 Activator points and 44 Chaser points.