I was about 15 minutes later than expected, partly due to my very slow walking
speed at present. I parked in the saddle below the summit to the east.

At the summit there is a large open area with 2 comms compounds. The southern
compound has a multisection guyed mast, with large anchor posts outside the
compound that are a perfect support for a squid pole. I set up at the base of
the one in the centre of the clearing & also used the post as a support for a
nylon fly sheet to keep the sun off me & the gear:

I was active for just over an hour and worked 12 stations, including S2S
contacts with Ian VK1DI/3 on Mt Porepunkah and Glenn VK3YY on Mt Torbreck. I packed up after working Glenn, almost forgotting about Wayne VK3WAM. I set up the mobile 40 m whip on the car & headed back to the main road. When almost down, I checked SOTAwatch on the iPad after going thru a closed gate. Wayne had been spotted a few minutes earlier. With little heard on the whip, I set up the portable dipole and promptly worked Wayne. Packed up again & headed to Yackandandah to buy lunch, then back to Wodonga.

I knew that Wayne VK3WAM was due to activate another summit during his bushwalk, so kept an eye on the SOTAwatch site  with the iPad. Once he was spotted, I went outside Mum’s home to set up to try to catch Wayne, only to find S9 noise. So I packed up & headed for nearby Huon Hill. Could have driven to the summit, but parked in the saddle below and climbed the foot track to the summit. 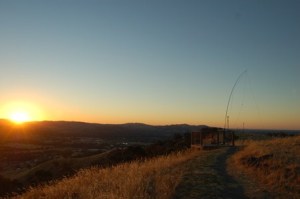 Looking west at the viewing platform on Huon Hill

There are several small viewing platforms near the summit, so I set up in one,
strapping the pole to the safety rails. As soon as I was operational I could
hear Wayne and promptly completed a S2S contact. I then moved up 5 kHz and
worked another 12 stations before closing just before sunset.